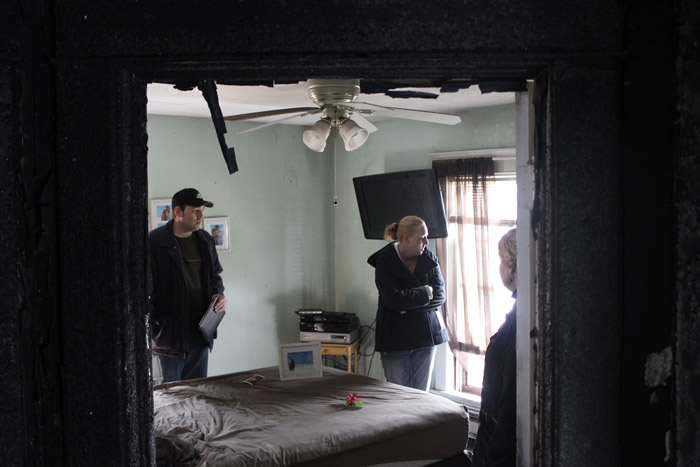 Kris Schewe and Beth Sackson speak with neighbor Tina Clapper on Thursday when visiting their bedroom for the first time since the house burned on Wednesday morning. The bedroom and one hallway were the only two places not charred black by fire. -- Tim Engstrom/Albert Lea Tribune

The fire was so bright, 15-year-old Alex Clapper thought it was daytime and woke up.

That’s how a neighbors-saving-lives-of-neighbors story began on Wednesday morning around 1:30 a.m. The rescue played out in a matter of minutes.

The boy looked out the window and realized the brightness was fire. He woke up his parents, Kevin and Tina. Older sister Amber awoke, too. 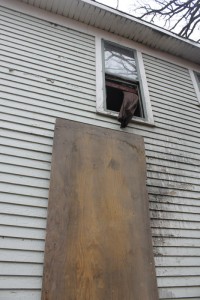 A curtain hangs through a window where Kris Schewe and Beth Sackson climbed down a ladder to safety. -- Tim Engstrom/Albert Lea Tribune

Kevin, Alex and Amber all called 911 at about the same time. Kevin’s cell phone recorded the call to 911 as 1:38 a.m. Amber went to see if her son, Haayden, was safe. She grabbed him and, while talking to 911, carried him outside to a Chevy Trailblazer sport-utility vehicle.

The house at 322 Vine Ave. was on fire. The couple living there, Kris Schewe and Beth Sackson, were sleeping. The family living at 320 Vine Ave. was awake and began attempting to stir their neighbors.

Alex tried to break the door in. Tina began to throw rocks at the windows. The two houses have the same layout, so she knew which room was likely to be their bedroom.

Kevin arrived at the front of the house with a ladder.

In the bedroom, Beth woke up, startled. She suddenly heard a pounding noise. Smoke wafted above her. She grabbed Kris and said, “Oh my God! The house is on fire!”

They stood up, and the smoke was so black they could not see each other. Beth found her way to the door and opened it. She saw flames at the staircase and closed the door.

She went to the window at the front of the house and opened it as far as it would go — halfway. Black smoke billowed out. Kevin placed the ladder under the window. Amber climbed the ladder and, sucking in the black smoke, attempted to open the window further. It would not budge.

Meanwhile, in the black of the room, Kris had found the window on the side of the house and busted the glass with his forearm. He yelled out, “Over here!”

Amber jumped off the ladder and had to recover for a moment from breathing the smoke.

“When I got off the ladder, I was almost vomiting. It was that bad,” she said. 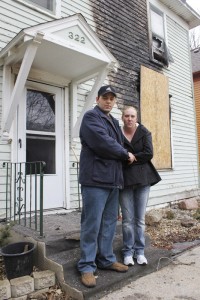 Kris Schewe and Beth Sackson stand in front of the charred home they resided in until early Wednesday morning. The upper right window is where the first attempt to rescue them by ladder failed because the window did not open wide enough. -- Tim Engstrom/Albert Lea Tribune

Kevin carried the ladder to the house’s side and propped it up under the bedroom window.

Smoked poured out of that window, too, and flames brightened the night sky from the back of the house.

Kevin held the ladder, and Albert Lea police officers Jason Taylor and Adam Hamberg arrived and came to the ladder. Kris assisted Beth out of the window. She stepped down the ladder wearing only her undergarments and was assisted off the ladder by the people at the bottom.

Kris threw a blanket out of the window for Beth to wrap up with. People from the neighborhood had begun to show.

Tina scurried into her house to get clothes for Beth, while Amber took her to “the day care.” It is a house the Clappers own on the other side of their home that they intend to turn into a child care place geared for military families.

Kris somehow located his cell phone and cigarettes in the pitch black of the room and came down the ladder in his boxer shorts, bleeding from knocking out the window. He declined help at the end of the ladder. He turned and saw the whole back of the house on fire and saw an electrical line melt and snap.

Firefighters arrived, and the police officers began pushing people to stay away from the house.

Kris, too, went to the day care. Tina found clothes for Beth, but Kris was too big so he wore a blanket. Later, clothes from a friend, Quincy Borland, fit him.

The American Red Cross was there and ready to put the couple in a hotel for the night.

“The Red Cross is an awesome organization,” Kris said.

However, Beth and Kris had to spent the rest of the night at Albert Lea Medical Center. Because they had suffered a dose of smoke inhalation, they were placed on oxygen for a couple of hours. They also suffered scrapes and cuts from climbing through the broken glass.

The local Red Cross chapter did provide the couple with money for clothing and food and paid for them to stay at the Best Western on Wednesday and Thursday nights. Today, Beth and Kris will have to figure out where to stay, though they said it probably will be at Greg and Karen Kral’s place. Karen is Kris’ mother and owns 322 Vine Ave. 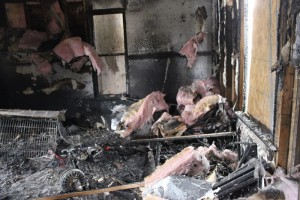 Pink insulation brightens the blackened living room of the home at 322 Vine Ave. Sadly, a pet kennel is a reminder of the loss of a pet bulldog. -- Tim Engstrom/Albert Lea Tribune

The couple on Thursday entered their burned-out residence for the first time since they exited it via an upstairs window on Wednesday morning. The entire inside was charred black except for one hallway closet and the bedroom from which they escaped.

They were thankful for the rescue the Clappers had launched.

“What I do know is that I am just thankful and to those guys for sure. We would’ve been toast,” Kris said.

Coming into the house brought tears to Beth. The couple lost a 6-month-old bulldog named Staley, who was in a pet kennel. They also thought they had lost two cats, Foster and Takara. But Takara, a 7-month-old calico, apparently survived. People have described seeing a kitten with her signature marking, a triangle on the face. Tina has left food out for her. The pet is more familiar with the nickname “Lil Kitty.”

The work Kris had done to refurbish the interior of the house had been for naught, as it was destroyed. He had lived in the home for three years, but when Beth moved in, he began making a bachelor pad into a respectable home. They already remodeled the living room, and he was re-staining the old oak.

“We were building our lives,” Beth said.

Many of their belongings were destroyed — washer, dryer, refrigerator, furniture, tables, computers, photos, poetry, clothing. However, Kris was happy to find his iPad in perfect shape by the bed in the bedroom. Beth had given him the computerized tablet for Christmas.

Beth, 30, is the general manager at the Taco Bell restaurant in Albert Lea, and she said her workplace has been supportive, allowing her any time she needs to recover. Kris, 31, most recently worked in sales. 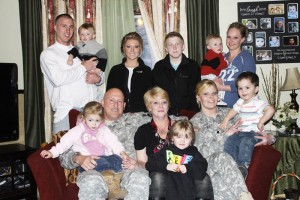 The couple still plans to get married Sept. 3. Many of their wedding items were lost in the fire. Beth’s sister, Holly Laite, is heading an effort to restock wedding goods. Also, anyone wishing to donate items can drop them off at Laite’s home at 102 Fairview Drive in Albert Lea between the hours of 9 a.m. and 8 p.m. She can be reached at 507-391-4557.

Borland said a benefit is being planned for the couple. It is slated for May 21 at the Albert Lea Armory.

Kevin Clapper is in the National Guard and deploys for a year of training in Georgia on May 30. He will be away more extensively May 11, so he has less than a month to get ready for the long time away. His home was damaged on the side facing the fire.

Members of the Albert Lea chapter of the Yellow Ribbon Program, a support group for military families, stopped by the Clapper home on Thursday to let them know that if they need any help, such as cleaning up the mess or damage left by the fire, they would be there.

Kevin, on Thursday, went to work at Fort McCoy, Wis., and returned that evening. He recounted the ladder rescue and said, “These guys are safe. That’s what matters.”