Memorial services for Jay Steven Gustafson, 60, of Albert Lea will be held at 1:30 p.m. Saturday at First Presbyterian Church. The Rev. Dwight Netzer will officiate. Interment will be at Graceland Cemetery. Visitation will be one hour prior to the service at the church. To sign the guest book, go to www.bayviewfuneral.com. 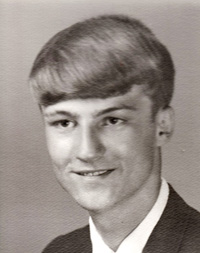 Jay Steven Gustafson was born on March 30, 1951, to James and Elizabeth (Knudsen) Gustafson in Kenmare, N.D. He graduated from Albert Lea High School in 1969 and graduated from University of North Dakota with a bachelor of science degree in education. Jay worked for a short time as a salesman and then worked as a successful stockbroker for many years. Jay was very involved in athletics. He was an all-state athlete in three high school sports. Jay played quarterback on two of Albert Lea’s state champion football teams. He was also quarterback for the University of North Dakota Division II national championship team. Jay was honored with being named “Hundred Year Quarterback” for University of North Dakota. He was named to the university Hall of Fame and also the Albert Lea High School Hall of Fame. Jay served as assistant coach at the University of North Dakota for two years. Jay enjoyed coaching and especially loved coaching his son and other youth in basketball, football and baseball. He coached with enthusiasm, love and success for many years. Jay was also a basketball coach for the Minnesota Magic AAU teams. He was a history “buff,” an avid reader and had acquired an extensive library through the years. Blessed be his memory.

Survivors include his son, Matt Gustafson and his mother, Debra, both of St. Paul; father, James Gustafson, of Albert Lea; sisters: Susan Gayle Price of Chicago, Karen Margaret (Andy) Kramer of Marine on St. Croix and Nancy Lynn (John) Doherty of Waconia; many nieces and nephews.

Jay was preceded in death by his mother, Elizabeth.