A man and his brother, both veterans of the Vietnam War, are planning a motorcycle ride to visit the Vietnam Veterans Memorial in Washington, D.C., that they hope will give them a chance to talk about their experiences and see the wall for the first time.

“It’ll be an emotional ride,” Pat Gruber said. “I haven’t been there.” 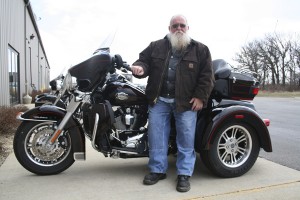 Pat Gruber poses for a photo with the bike he bought at Bergdale’s Harley Davidson in Albert Lea. -- Kelli Lageson/Albert Lea Tribune

Gruber and his brother plan to leave Minnesota on April 25, and they’re in no hurry. He’s prepared the bike for the trip and has already put 1,000 miles on it.

“The whole trip’s going to be nice,” Gruber said. “We want to give recognition to the ones that didn’t come back.”

Gruber and his brother were in the Marine Corps. Gruber went to Vietnam in the fall of 1967 and said he went for the right reasons and because of how he was raised. Chuck was also there at the same time, and Gruber said it has brought them closer to have shared that experience.

Gruber said he wants to see as many of the monuments in D.C. that he can, and he plans to extend the trip to see friends, some who are also veterans, in Boston. Gruber still gets emotional when talking about his time in Vietnam, but he is looking forward to paying respects at the memorial.

“Seeing the wall will be hard,” Gruber said.

Later this year Gruber hopes to do a long touring of much of the country by himself. He has friends and family he plans to stop and see in states all over the south, southwest and northwest regions of the U.S.

“I’ve always wanted to do a major touring,” Gruber said. “Nothing but the open road to look at.”