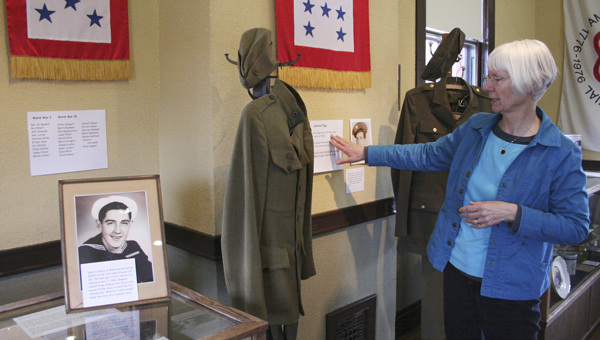 WELLS — Although there are no signs outside of the Wells Depot Museum, don’t let that scare you off. The signs are on order, and the museum is open for tours.

The museum opened last August during the town’s annual celebration, Wells Kernel Days. And just because you may have visited the building during its grand opening doesn’t mean you’ve seen everything the museum has to offer. 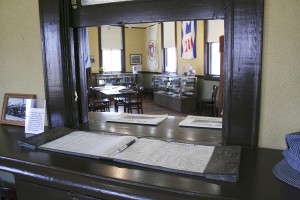 Through the original ticket window at Wells Depot Museum people can see artifacts of the railroad and the town on the walls and in the cases lining the museum. -- Michelle Haacke/Albert Lea Tribune

“We’ll be changing the displays frequently so people will come back again and again,” said Betty Hermanson of the Wells Historical Society.

The current featured display, “Mother, the queen of the home,” highlights the mother’s role in the home nearly 100 years ago. Hand-sewn doilies, tablecloths and aprons along with a vintage McCall’s needlework, knitting and crochet magazine, a “Tasty Tidbits” cookbook and old patterns also line the display.

Hermanson said a back to school display is already in the works for around mid-July through September. A number of trophies acquired from the school will highlight the Wells Wildcats of yesteryears. A display featuring World War I and II memorabilia is planned for November, taking the schedule of special displays through the end of the year.

“We felt it was important to do more than focus on the railroad artifacts,” said Hermanson. “We wanted to highlight the city and started collecting things from people in the area.”

The depot building was acquired in 2005 for just $1 from the railroad. In 2009, a Minnesota Department of Transportation grant allowed the historical society to restore the building to a very close semblance of what it was in its heyday as a train stop. Once the building was repaired and restored, the historical society began collecting pieces of Wells history about a year ago and then opened in the fall.

Glass cases encompass a variety of memorabilia that represent Wells through the years, including promotional items given away by local businesses. A sewing case from Frederick’s Department Store, a thermostat from Wells Hatchery, a pocket mirror from Hinkley Chevrolet and a July 1952 Wells telephone directory are just a few items found in one case.

Different themes lie within each of the cases. Uniforms and flags from World War I and II memorabilia line one back wall. According to Hermanson, a collection of flags were donated by Orville Urbain, who had collected them from the now disbanded Rice Lake United Methodist Church. Church artifacts and old photos line another case.

One case that includes an old instrument and photos is dedicated to Harry Gillam, local legend as bandleader of the Wells Maroon Band and a local baseball player.

Of course, one small area features the story of how the town of Wells came to be and photo of the town’s founder, Clark W. Thompson.

Hermanson said all of the items found in the museum have been collected from locals, past and present.

“I remember thinking I hoped we had enough stuff for the grand opening, and thinking we’d probably just fill one room, and now we’re full,” she said.

The Wells Depot Museum, located at 100 First St. NW in Wells, is open Fridays and Saturdays from noon to 4 p.m.