7 inducted Friday to Wall of Inspiration 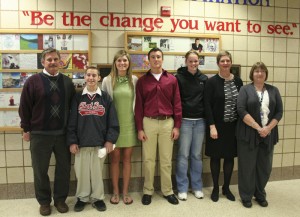 Seven Albert Lea High School teachers and students were inducted into the Wall of Inspiration Friday during a special ceremony to recognize how they’ve inspired others.

The Wall of Inspiration, which is in the Albert Lea High School commons, began in 2004 with 11 inductees. It was created in memory of Josh Kuphal, a 2002 ALHS graduate who was born with spina bifida. Shortly after graduation, he underwent surgery and died in the hospital.

A committee, made up of the Kuphal family — Brian and Kathy, Josh’s parents, and Laura, his sister — and one student from each high school grade, choose inductees from many nomination letters.

Inductees decorate ceramic tiles with what inspires them and what they think would inspire others. Most include quotes, photos or pictures. They are posted on the Wall of Inspiration.

During the ceremony teacher Jim Haney gave a description of each inductee and read from their nomination letters. Each inductee also had a short video where they explained why they decorated their tiles the way they did.

Following is a little about each of the new inductees:

Kriewall, a senior, is involved in sports, the National Honor Society and Link Crew, among other activities. A nomination letter for Kriewall said he “does things his way, the right way, and works very hard to be the best he can at everything he does.”

Haney said Kriewall is inspired by the drive to succeed and to be successful in life.

Royce has been teaching at ALHS for 12 years. She’s the chairwoman for the Albert Lea Area Schools citizenship committee and involved in other activities. A nomination letter for Royce said her “hard work and dedication to students is second to none.” It also said she’s an advocate for students and is constantly taking on extra duties. Royce said she was humbled by the award. Her tile is lined with words like “compassion” and “acceptance,” which she thinks everyone should use in their life.

Schultz manages basketball and baseball teams at ALHS. In the future he’d like to work at Good Samaritan Society. A nomination letter for Shultz said he always has a bright smile and a positive attitude that brightens the day of those around him.

Heaney has been teaching for 28 years. She coaches many choirs at ALHS and Southwest Middle School. A nomination letter for Heaney said she “demonstrates how one can face tragedy and adversity, yet continue with a productive life.” It also said she continues to inspire students and staff with her love of music and school.

Underdahl is involved with sports and 4-H. She plans to be a physical therapist in the future. A nomination letter for Underdahl said she “always gives her best when up against any challenge, whether it be in sports, school or at home.” The letter also said she’s a loyal and generous person.

Nystrom has taught for 45 years, and is a long-time hockey coach. He is the winningest hockey coach in Minnesota and is third nationally for wins in a career. A nomination letter for Nystrom said his “positive outlook on life is infectious, and you can’t help but want to be around him.”

Sager is involved in sports, the National Honor Society and Link Crew, among other activities. She plans to attend Wartburg College and eventually go to graduate school for physical therapy. A nomination letter for Sager said she “is an outstanding person and is respected by students and staff in the classroom.” It also said she respects people of all ages and works hard. Sager said she was surprised when she found out she was nominated.

“I was really surprised, but it was a good feeling,” Sager said.