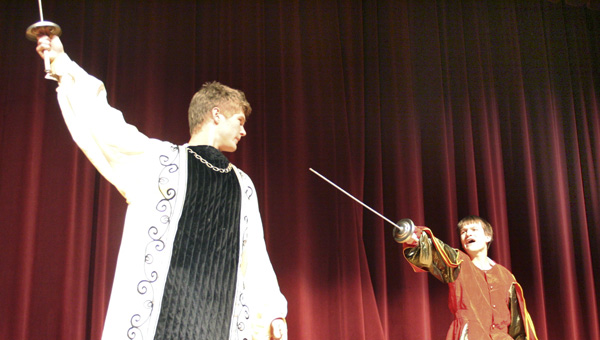 A play with some Shakespearean comedy, and without the complicated dialogue, is opening tonight at Albert Lea High School.

A cast of just eight students are ready to present “Leading Ladies,” a comedy that follows two Shakespearean actors. The two men are down on their luck when they hear about an elderly millionaire who’s looking for her two lost relatives. They decide to dress as her nieces, and complications arise with mistaken identities and new love.

The show’s director, Molly Grimmius, said she thinks doing a full Shakespeare play is daunting, and likes this comedy because it’s loosely based on “Twelfth Night.”

Daniel Edwards rehearses a monologue Tuesday afternoon in the auditorium at Albert Lea High School. He’s one of eight students who make up the cast of the comedy “Leading Ladies,” which opens tonight. -- Kelli Lageson/Albert Lea Tribune

With a small cast of eight students there’s been plenty of bonding time for the group. Senior Ashley Petersen said that’s been one of the best parts of working on the play.

“We get along really well,” Petersen said. “I really love the community the cast has.”

Senior Zach Wilke agreed that working as a small cast allows the actors to get closer than working on large musicals. He plays one of the Shakespearean actors who tries to get rich quickly.

Daniel Edwards, a senior, said he likes the last scene best where all of the mishaps are resolved and all the story lines are wrapped up. He too likes the small cast because the play moves quickly.

“Everybody has a major part,” Edwards said.

Grimmius said costuming was a big part of the show, with frequent costume changes and elaborate costumes. She said Riverland Community College and Albert Lea Community Theatre helped the school by borrowing costumes for the production. Almost half a house has been built on the stage, and the set was designed by John Fure. 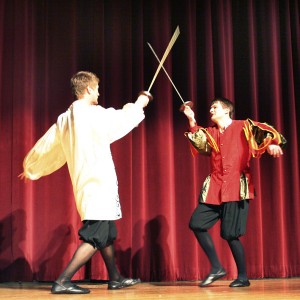 “The set really adds to the comic situations that the play lends itself to,” Grimmius said.

The play opens tonight with performances at 7:30 today, Friday and Saturday. Tickets are $5 for students and $7 for adults and can be purchased at the door or at Doyle’s Hallmark. Grimmius said the show is most appropriate for students in eighth grade and older because of some of the humor.

Tickets, please
What: Albert Lea High School’s spring play “Leading Ladies”
Where: ALHS auditorium
When: 7:30 p.m. Thursday, Friday and Saturday
How much: $5 for students and $7 for adults; available at the door and Doyle’s Hallmark