Memorial services for Richard “Rick” Darrel Kelly, 48, of Albert Lea will be held at 10:30 a.m. Thursday at Salem Lutheran Church. The Rev. Mark Niethammer will officiate. Visitation will be from 4 to 8 p.m. today at Bayview/Freeborn Funeral Home and one hour prior to the service. To sign the guest book, go to www.bayviewfuneral.com. 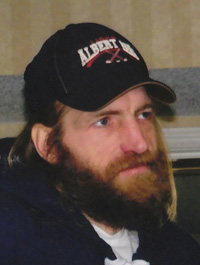 Richard Darrel Kelly was born on Oct. 20, 1962, to Warren and Jean (Cassel) Kelly in Albert Lea. He grew up in Albert Lea and graduated from Albert Lea High School in 1981. After school Rick worked in the family business as a carpenter. He also worked in the Twin Cities as a union carpenter for many years. He was united in marriage to Karla Werner on June 20, 1992, at Salem Lutheran Church. Rick was a Cub Scout leader for Pack 64 and was very active in the Albert Lea Hockey Association as a coach and team manager for youth hockey. Rick was a member of Salem Lutheran Church and also the Freeborn County Snowmobile Trail Association. He served as a captain on the Pelican Breeze, enjoyed snowmobiling, motorcycles and camping on the North Shore. Rick was a devoted father who especially treasured the time spent with his three sons and wife Karla. He will be deeply missed by all who knew and loved him.

Rick was preceded in death by his grandparents; mother, Jean; and brother-in-law, Edward.