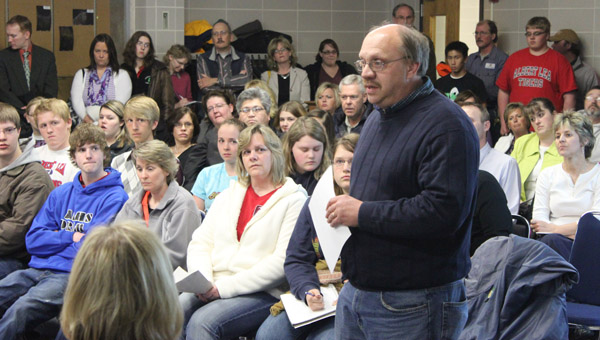 Todd Schoonover speaks to the Albert Lea school board Tuesday during the open forum. He questioned how a single band teacher can lead 100 students at the elementary level. -- Tim Engstrom/Albert Lea Tribune

The Albert Lea school board cut or reduced 17 positions Tuesday evening, visibly upsetting a crowd of more than 70 people who came to appeal to the board to spend more time on the decision.

The board voted 4-1 to pass the resolution reducing or cutting teaching positions for the 2011-12 school year. Board member Jill Marin voted against the measure and said she supports the realignment, but not cutting music teaching positions. She also spoke to high school students who were present to say she appreciated them and that they’re strong leaders.

“Our music parents and students are some of our greatest assets,” Marin said.

Board members Bill Leland, Linda Laurie, Mark Ciota and Jeshua Erickson voted to approve the budget reduction and resolutions to cut or reduce teaching positions. Board member Sally Ehrhardt was not present. After voting on the measure, several Albert Lea High School students were visibly upset — some were crying upon hearing the vote. 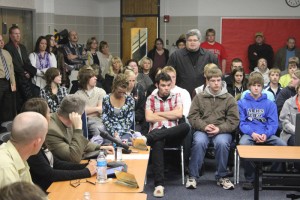 The Rev. George Marin of Grace Christian Church speaks Tuesday to the Albert Lea school board. He said Peter Gepson is a worthy teacher who should not be cut. -- Tim Engstrom/Albert Lea Tribune

Community members were able to speak to the board at the beginning of the meeting, which was held at Brookside Education Center at 5 p.m. Todd Schoonover, a parent of a band student, said he wanted to talk to the board about music cuts, not about high school band director Peter Gepson, who was on the list of teacher reductions.

“We need to take some time and think this through,” Schoonover said. “This isn’t thought out well.”

He said he hoped the board would provide a community forum where the matter could be discussed to show that they want to listen and hear concerns.

“That’s why we voted you in here,” Schoonover said. “Listen to us and take the time to hear us out.”

Community member George Marin, husband of board member Jill Marin, also spoke to the board to say he believes it’s their duty to save the job of Gepson because of the impact he’s had on student lives. ALHS senior Ray Stephenson addressed the board to say that cutting Gepson would hurt the band program.

“If we made changes and brought in a new instructor it would be disastrous,” Stephenson said.

Another parent of a band student, Paul Schmitt, addressed the board to say that citizens are recognizing Gepson’s contributions to the band program and asked the board to look at other solutions.

“It would be both a shame and mistake to not allow Peter Gepson to continue the work he’s done here,” Schmitt said. 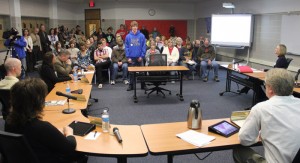 Superintendent Mike Funk spoke to the crowd to remind them of why the administration brought the resolution to the board. He said it was because of budget shortfalls and that he has full respect for all teachers in the district, including the next band director.

“People in Albert Lea are passionate about their fine arts,” Funk said. “Passion can be a great thing when properly harnessed.”

He said he was glad the students had campaigned on Facebook and shown up to the meeting to show their support for a teacher they loved. He then said that change will be something they’ll have to deal with in life, and that it’s noble to fight for a cause they believe in.

“We need to give change a chance,” Funk said.

He said he was disappointed to hear about Suzanne Mauer, the teacher who will take the band director position at ALHS, receiving mail that said she wasn’t capable of handling the position.

“Bottom line — she has what it takes to bring out the best in herself and others,” Funk said. 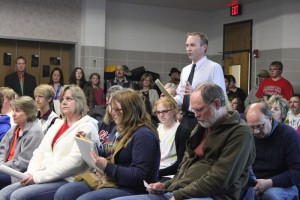 Leland said he’s gone through many similar cuts throughout his time on the board, and he appreciates how it affects students and programs. He also said he appreciates the administration for lessening the effects of the cuts by finding other sources of income and keeping as many programs as they can.

“The administration has done a phenomenal job,” Leland said. “These cuts could have been deeper.”

• Approved a transportation contract for the 2011-12 and 2012-13 school years that will save the district money and upgrade buses to include GPS and cameras.

• Recognized Angie Zoller for her work on the district’s website. Jim Quiram, director of technology and human resources, said it was a big endeavor, and that she helped make it one of the best websites in the state.

• Approved the addition of an early dismissal on June 2 to help teachers prepare for moving due to the school realignment.