Signs on the line 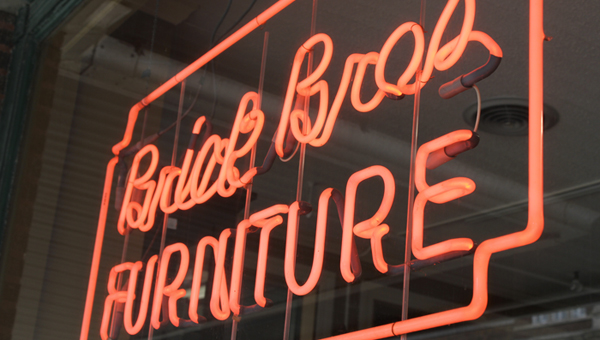 One of the most recognizeable downtown neon signs is the one in the window at Brick Furniture, which says "Brick Bros Furniture." -- Tim Engstrom/Albert Lea Tribune

Albert Lea Community Development Director Bob Graham said there was some confusion previously about whether the signs would be allowed in the downtown.

The most up-to-date version of the proposal allows dynamic signs in every business zoning district except for the downtown.

As defined in the ordinance, a dynamic sign is “a sign that has characteristics of movement or change, caused by automated means, either electronic or mechanical.” This includes change in the display, the sign structure or any other component of the sign. 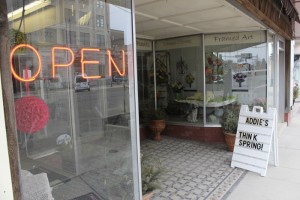 Albert Lea building Inspector Doug Johnson said the intent behind this proposal is to preserve the historic value of the downtown district. He noted that today’s definition of a dynamic sign would not meet the intent of the historic district.

Albert Lea Planning Commission member Robert Hoffman said the gist of the conversation by the commission members was that they didn’t want the downtown looking like Las Vegas.

The proposal echoes a decision made by the Albert Lea City Council more than a year ago, at which time a request from the American Legion Leo Carey Post 56 to place an electronic message board on its building was denied.

Todd Utpadel, manager of American Legion Leo Carey Post 56, said after hearing some of the ordinance proposals, Legion members have decided to wait and see how the proposal evolves before fighting either way. 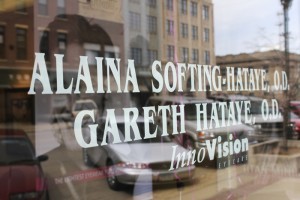 Vinyl lettering on windows, such as this example at InnoVision Eyecare, is another way downtown merchants reach their customers.

However, he noted, he hopes whatever is passed is enforced.

The proposed ordinance states that where dynamic signs are placed — in either a B-2, B-4, I-1, I-2 and IDD district — there must be no blinking, flashing or fluttering light changes in brightness. The message must stay on the sign for a minimum of four seconds while transitioning to the next message in less than half of a second.

It states the changes sequence must be accomplished by means of “instantaneous repixelization.” Fading, dissolving, scrolling, traveling or any transition that creates the illusion of movement would not be allowed.

Linda Knudsen, owner of Plymouth Shoes, said she is pleased the downtown will not be allowed to have dynamic signs under the proposal.

“I feel it would cheapen the downtown,” Knudsen said. “This is a historical area, and we shouldn’t have those neon lights in the area.” 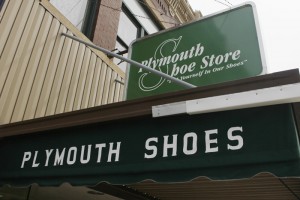 Words on an awning or an overhead sign, such as these at Plymouth Shoe Store, are common in downtown Albert Lea.

The proposed ordinance states that nonconforming signs cannot be enlarged or altered in a way that increases their nonconformity.

Walgreens between Bridge Avenue and Main Street is in the B-2 District.

Other highlights of the ordinance include allowing portable signs four times a year for businesses within the B-2, B-4, I-1, I-2 and IDD districts in the case of an event or sale. The city’s previous sign ordinance did not address these types of signs.

Graham said there are many portable signs throughout the community that have been up for extended periods of time. This ordinance would make those signs a violation.

If the City Council approves this change, this would be a significant policy change, he said.

Graham said in these districts people would need to go to the city’s Inspection Department to get a permit for the sign. A portable sign permit would expire five days from the date the permit is issued, and signs could not be placed in a public right of way or in any area that obstructs the view of drivers. 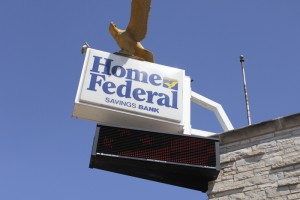 Home Federal Savings Bank has an electronic sign with a changing message. The city terms these as "dynamic signs."

The ordinance defines portable signs as signs that are designed or intended to be moved or transported from one location to another. They can be self-supporting, on wheels or leaning on a stationary structure. They do not include sidewalk signs.

Portable signs would also be allowed in the downtown on a limited basis. In these cases, people would need to also go to the Inspection Department to get a permit for the sign. The sign could be up for 14 days.

The proposal states one sidewalk sign would be allowed in front of each downtown business during business hours. It cannot be illuminated or have any shimmering or revolving parts.

Other parts of the ordinance

According to the ordinance, projecting signs in the downtown would be limited to being no more than 4 feet long and would not be able to project more than 3 feet, 6 inches from the building facade. Only one would be allowed for each building.

Signs that flash, pulsate or distract drivers are still not allowed because they can be mistaken for emergency barricades or vehicles.

The proposed ordinance also includes a description of what kinds of signs are allowed in other districts, as well.

Graham said some of the major changes to the ordinance include definitions of all the different types of signs and other terms used in the ordinance. The sign ordinance was incorporated into the city’s zoning ordinance in 1976. It has not been revised since.

The proposal is slated for a public hearing in front of the Planning Commission in May.

Hoffman encouraged residents to voice their opinions about the proposal.

“A lot of work has been put into this,” Hoffman said. “But hopefully we get some more public input. As of yet we haven’t.”

He said there have been positive joint meetings between the downtown preservation committee but only a few opinions have been expressed.