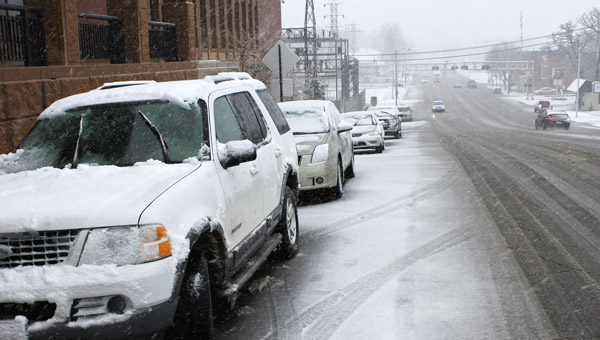 However, Albert Lea didn’t get 2 to 3 inches. Most places were between 1 and 2 inches, which already looks like less than that because the snow has melted somewhat.

What snow remains is expected to melt soon. It was a typical April snowstorm in southern Minnesota.
The high today is expected to be 46. On Thursday, the air temperature should reach 46, also. On Friday, 50, and on Saturday, 53. If the warm temps don’t get rid of the white stuff, the rain that could fall on Thursday or Friday should.

In 2010, Albert Lea didn’t get any snow in April or in March, making for a pleasant spring season. This year, as people prepare to plant gardens and farmers get ready to plant their fields, a snowstorm entered the picture to discourage green thumbs and motorists alike. Well, at least for a day or two.

People went to work in Albert Lea Tuesday morning while big wet snowflakes fell. The air temperature around 8 a.m. was 34 degrees, so snow fell even though the ground was above freezing. Rain fell overnight Monday but turned to snow after 4:30 a.m. Tuesday.

Freeborn County and several counties around it were in a winter weather advisory Tuesday, according to the National Weather Service.

Mower County and counties to the east were in a winter storm watch. For most of the Midwest, the storm has past, and officials are back to worrying about flooding rivers.