PHIL CAMPBELL, Ala. – A large tornado ripped across Franklin County late Wednesday afternoon, leaving behind a path of destruction that many called “unimaginable.”

As of Wednesday night, there had been no final count of those missing or dead, but at one point Wednesday evening, a Phil Campbell official put that number at 12. 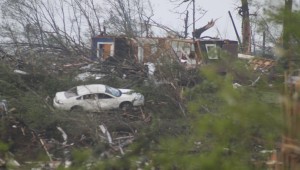 “I never imaged I would see something like this,” one eyewitness said as he asked police officers about a missing family member.

The storm tore a path across the town of Phil Campbell and traveled to the East Franklin community, leveling homes and trees along the way.

Brian Isom said he was getting out of a van in the First Baptist Church parking lot when the tornado passed overhead.

“I was trying to get the kids into the basement when it came over,” he said, still visibly shaken more than an hour after the storm passed.

“It was just pulling me all over the place. I thought it was going to suck me up.”

There was heavy visible damage to Phil Campbell High School and a housing authority apartment complex was completely destroyed.

Many residents wandered aimlessly through the streets in the wake of the massive storm, many asking anyone they could find about missing loved ones.

A triage area was set up at Phil Campbell Rescue Squad and victims were being transported to various hospitals in northwest Alabama, including Russellville Hospital, Red Bay Hospital, Helen Keller and Eliza Coffee Memorial hospitals.

Witnesses spoke about pulling victims from cars, basements and from underneath beds.

Check www.franklincountytimes.com throughout the day Thursday for more information on this developing story.