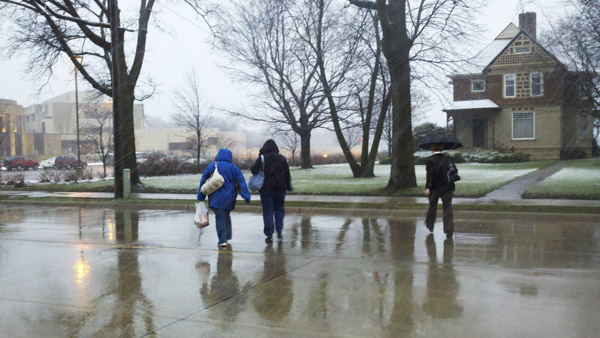 Three workers cross Fountain Street this morning in the wet snow on their way to Albert Lea Medical Center. Two don their hoods while the third holds an umbrella. -- Tim Engstrom/Albert Lea Tribune

It might be spring, but wintry weather is forecast for Tuesday. The National Weather Service has issued a winter weather advisory for southern and east central Minnesota and west central Wisconsin.

People went to work in Albert Lea this morning while big wet snowflakes fell. The air temperature around 8 a.m. was 34 degrees. Rain fell overnight but turned to snow after 4:30 a.m.

The advisory is in effect for Tuesday afternoon through that evening until noon Wednesday. The advisory includes Freeborn, Faribault, Waseca and Steele counties, among others. In Iowa, Winnebago and Worth counties are included.

“It does include the Twin Cities. It appears that the heaviest snow from this storm will occur just to the southeast of the area, but accumulations of 4 to 6 inches are likely from near Waseca and Albert Lea to Red Wing, Durand and Eau Claire,” the weather service says. “Isolated 6-inch amounts are possible toward the Eau Claire area. Accumulations of 2 to 4 inches are likely for the rest of the area.”

The National Weather Service has issued a winter storm watch for areas to the east. This includes Mower, Olmsted, Dodge, Fillmore counties, among others.

The National Weather Service said a low pressure system is expected to form over Kansas on Tuesday night and push toward Illinois, impacting the storm. The track of the storm could be hard to predict.

Below is a map issued by the National Weather Service:

The Tuesday forecast for Albert Lea calls for snow in the morning, then rain, snow and sleet in the afternoon. Snow will continue into the night. The high on Tuesday is expected to be 37; the overnight low just 30. Some snow could fall on Wednesday. Thursday and Friday bring the possibility of rain.