Memorial services for Verlie Dawn Schwen, 91, of Albert Lea will be held at 2 p.m. Wednesday at First Presbyterian Church. The Rev. Dwight Netzer will officiate. Interment will be at Fort Snelling National Cemetery. Visitation will be one hour prior to the service. To sign the guest book, go to www.bayviewfuneral.com. 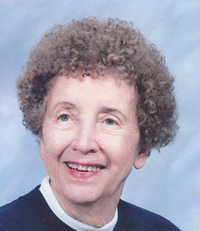 Verlie Dawn Schwen was born on Nov. 18, 1919, to Rollin and Raynette Cross in Fairmont Township in Martin County. She grew up in Bricelyn with stepfather Edward Hebert. Verlie graduated a valedictorian from Bricelyn High School and later attended the Minnesota School of Business in Minneapolis. On Feb. 25, 1939, Verlie was united in marriage to Russell Schwen in Northwood, Iowa. They made their home in Blue Earth until 1953 and then moved to Mason City, Iowa. Verlie started singing in the church choir while a teenager in Bricelyn and continued singing in church choirs and doing solo singing in churches in Blue Earth, Mason City, Iowa, and Albert Lea. Verlie sang for weddings and funerals as well as singing in many different church choirs and glee clubs for more than 70 years. While living in Mason City, Verlie helped Russell in the family restaurant business and when they moved to Albert Lea, she worked in Russell’s Toyland store which was located on Clark Street in Albert Lea. Verlie also worked for Streater Industries in the billing department for a number of years. Verlie was a member of the Eastern Star of Albert Lea for many years. Verlie and Russell spent many winters in Arizona and summers at their lake place in Minnesota.

Verlie was preceded in death by her parents; husband, Russell; a son, Charles; and a daughter, Claudia.