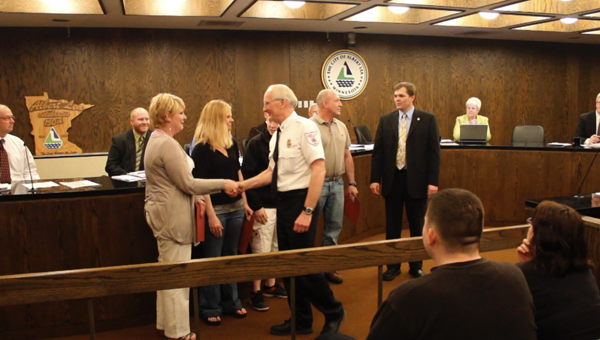 Albert Lea city leaders on Monday thanked and recognized the efforts of the members of one family who successfully saved their neighbors from death during a house fire.

Albert Lea Mayor Vern Rasmussen, Albert Lea Fire Chief Paul Stieler, members of the council and a lineup of firefighters were present to applaud the Kevin and Tina Clapper, teenage son Alex Clapper and their adult daughter Amber Steele, all four of whom were involved in the rescue in the wee hours of April 13 of next-door neighbors Kris Schewe and Beth Sackson.

Rasmussen read a statement that came with life-saving awards:

“The Albert Lea Fire Department hereby recognizes you for coming to the aid of fellow citizens at 322 Vine Ave. on April 13, 2011. Your courage and willingness to perform a rescue to victims of a fire which resulted in their survival is exemplary.”

The Clappers live at 320 Vine Ave., and Schewe and Sackson lived at 322 Vine Ave., which they rented from Schewe’s mother, Karen Kral.

Firefighters earlier this month said the place caught on fire, most likely among a few possibilities, as a result of a laundry basket that had caught on fire on the stove the evening before and was believed to have been put out, then left outside on the deck the evening before. That fire then, it was said, eventually regained life over the hours and by 1:30 a.m. the house was on fire and smoke poured through the bedroom where Schewe and Sackson slept.

Alex’s bedroom faces their house. The fire was so bright, the boy thought it was daylight and awoke his parents. The daughter awoke, too. The family successfully awoke Schewe and Sackson by throwing rocks and banging on the front door.

The two homes have similar layout, so the Clappers knew which windows were for bedrooms.

The first attempt to rescue them with an extension ladder failed because the bedroom window on the front of the house would open only halfway. The second attempt succeeded on the side window. Not bothering with the frame, Schewe busted open the glass with his arm.

Schewe and Sackson made their way down the ladder to safety.

Most of the Kral house at 322 Vine Ave. was blackened from smoke and fire. Amazingly, the only interior room not charred black was the one in which the couple slept.

Rasmussen characterized the life-saving efforts of the Clappers as part of living in a city where neighbors care for neighbors.

“This is just a small example of what makes Albert Lea great,” he said.