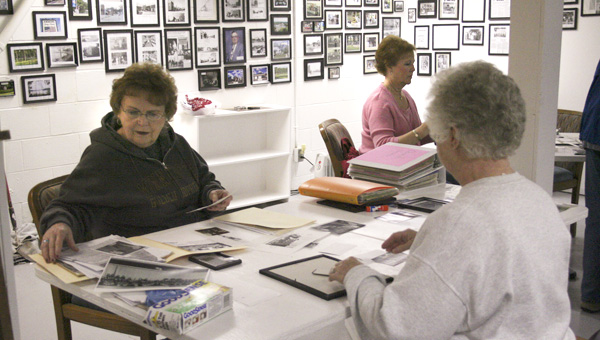 EMMONS — Each Tuesday and Thursday morning for the past couple of months, a group of Emmons residents have been volunteering their time in the basement of the Emmons Library, getting things ready for the unveiling of the future Emmons Museum.

The target date for the grand opening is tentatively scheduled for June 11.

“Hopefully, in a couple of months, we will have a diverse display of photos, memorabilia, videos and collections that represent Emmons over the last 150 years,” said Dave Olson of the Emmons Museum project.

Formerly a liquor store, the Emmons Library opened more than a year ago in the main level of a small building located at 126 State Street in downtown Emmons. After it was met with success by the community, several locals collaborated to form a museum in the basement level.

“Now, we’re doing the basic layout with the pictures,” said Olson. “Next month we’ll start filling the shelves with memorabilia.”

The pictures will form the foundation of the museum. Volunteers have been spending their Tuesday and Thursday mornings going through old photographs and newspaper clippings, clipping and framing them to hang along the walls. The photographs are hung by topic, and 10 different categories represent Emmons history: church, school, business, city, community, celebrations, farming, Emmons Fire Department, Emmons American Legion and miscellaneous.

The school section features a piece of framed art of the school, created by Beth Tostenson in 2003, surrounded by framed newspaper clippings of the original construction of the school and framed lists of students from 1924 to 1999. The city section features an 8- by 10-inch photo of LeRoy Roberts, who not only served as Emmons’ mayor from 1959 to 1995, but also holds the record in Minnesota as serving the longest consecutive term as mayor.

Because there will be so many photos and clippings left over after all of the framing is done, scrapbooks will feature all of the pictures that don’t make it on the wall.

In addition, Olson and other members of the project committee are collecting memorabilia from churches and the former school. Trophies collected from sporting events and a large drum are just a couple of the items that will be on display. Olson said a big-screen TV will play a DVD of compiled clippings from school events, Christmas parties, parades and town celebrations taken over the years.

“These things have sparked a lot of conversation of things that have happened over the years,” said Olson.

Once the museum is open, Olson said their goal is to have enough memorabilia to be able to switch out displays every couple of months to keep people coming back again and again.

The museum space — complete with tables and chairs — will also be available for rent for special events, meetings and class reunions. Olson said the tentative hours will be 9 a.m. to noon each Saturday.

The project committee is still seeking memorabilia for the museum. Donations can be made to Olson by calling 507-297-5550.