Bridget King and Adam Stevens were married at 2 p.m. on July 24, 2010, at the Spring Grove Cinema in Spring Grove. The Rev. Mark A. Bengston performed the ceremony.

Bridget is the daughter of Diane King of Albert Lea. Adam is the son of Paul and Dianne Stevens of Caledonia. 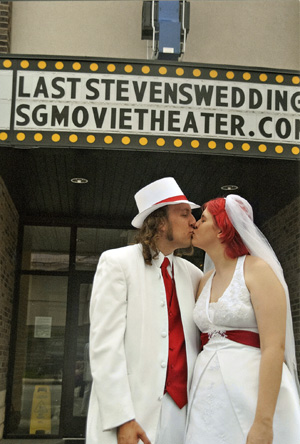 Maids of honor were sisters of the bride, Vanessa King of West Des Moines, Iowa, and Tina King, of Eagan.

Best man was Clint Phillips, brother-in-law of the groom of Austin.

Groomsman was Corey Lewis, brother-in-law of the groom, of Coconut Creek, Fla.

Ushers were Adam King, of Albert Lea, and Max King, of Rosemount, brothers of the bride.

Music was provided by Clint and Nikki Phillips.

A reception and dance were held at the Caledonia Four Seasons at 5 p.m.

Bridget is a 2005 graduate of Alden-Conger High School and a 2010 graduate of Minnesota State University, Moorhead.

Adam is a 2004 graduate of Caledonia High School. He graduated from Brown College, Mendota Hieghts.

Both bride and groom are employed in Fargo, N.D., and reside there.

A wedding trip was taken to Los Angeles, Calif.