When you stop and consider: All is well

I have a habit of focusing too much on little things and insisting they be perfect. For a guy who often undertakes home-improvement projects beyond his rudimentary carpentry skills, this obsessive-compulsive tendency can be downright annoying. 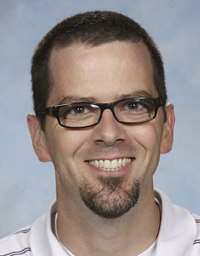 Over the years, I’ve felt compelled to reset multiple levels of scaffolding to fix a piece of siding that no one in the world (except me) would see as slightly off level, and I’ve pulled out more than one newly installed window that had already been plumbed, leveled, caulked and screwed into position because it didn’t open and close quite as smoothly as it might.

This is not to say all of my work ends up perfect. Some of it’s downright embarrassing, but I suffer for it. Trust me.

I recently made two large garden boxes for our summer vegetables. The first turned out great. The second had problems. Few of the 2-by-8 edges met flush at the corners. My wife, Jenny, pointed out that the ugly corners were likely due to the irregular 4-by-4 timbers I had fastened the boards to inside each corner. Since the timbers weren’t completely straight, flush corner joints were impossible.

Don’t worry about it, she said. We’re talking about rustic garden boxes. They aren’t perfect, so who cares? They’ll still do the job. Couldn’t we just place the boxes, level them, and get on with the gardening?

We could, I said, but if I took everything apart and started over, I could fasten the 2-by-8 corners to one another first—insuring those superior flush corners — before screwing them to the timbers for added stability.

Jenny took a deep breath, smiled and said, “All has been well. All will be well … All is well.”

We learned the “all is well” mantra a few years ago while reading a book on mindfulness meditation by the Buddhist monk, author and peace activitst Thich Nhat Hanh (“Brother Thây”). It’s a simple mantra that one can recite while sitting, walking or even running by repeating the words in your mind and focusing on your breath.

The idea is that a part of being mindful in the present moment is knowing that whatever is happening now, things will be OK, just as they were before, just as they will be in the future. Moreover, your “now” is actually only a small piece of the larger “now.” In other words, life in this moment is much bigger than your current state of suffering or difficulty.

My wife’s adopting this mantra to cope with my mild OCD might seem humorous, but I’ve found the practice to have practical, calming, almost healing effects.

About two years ago Jenny’s younger sister, Jody, lost her 38-year-old husband. With two young sons (ages 4 and 5) and a wife seven months pregnant, Brian died suddenly of a heart attack. After hearing the unbelievable news, we joined the rest of her family at her parents’ farm near St. Cloud.

When we do overnights there, I often try to get a little solitude by going for a run in the cool of the early morning or evening. In the days surrounding Brian’s funeral, I, for some reason, found myself running in the sweltering mid-afternoon sun. As I ran, physically struggling with the heat and mentally struggling with Brian’s passing, I focused on Brother Thây’s “all is well” mantra.

Clearly, all was not well.

In the following days, I continued to run and repeat the mantra, and I thought of how others had suffered similar losses and survived. Long ago my mother’s cousin had lost her husband while she still had eight children at home. Somehow she managed to raise those kids in a happy home, eventually remarried, and 40 years later lives a wonderful life. All has been well.

Despite the positive parallel, I repeatedly lost focus, my thoughts turning cynical: But I returned to “all is well.”

Jody was healthy. She lived just a few miles from her parents, two adult nephews, eldest sister and brother-in-law, many extended family members and friends.

They’ve stepped up and supported her beyond what anyone imagined. Jody’s sisters were present for baby Jordyn’s birth, an amazing memory they will always share. Jody’s kids have an abundance of positive male role models in their lives, men who have grown in ways they likely wouldn’t have without being called to these new roles.

Life continues to be challenging for Jody. Even with great support, being a single mom to three young kids is just plain hard. But all really is well.

In my life as a teacher, I sometimes repeat the “all is well” mantra in my mind as I stand at the door greeting students before class, knowing that whatever conflict has occurred in their lives years ago, last year, last week, last period, the present moment can be different. All is well. Further, no matter what I’ve been preoccupied with, all will be well for me, too.

Things tend to go better on days when I am mindful of this practice, and I’m thankful for the “all is well” mantra and the peace it gives me.

Jeremy Corey-Gruenes teaches in the English Department at Albert Lea High School. He lives in Albert Lea with his wife and two young daughters and can be reached at jcorey2@gmail.com