Funeral Services for Wilma G. Kvam of Northwood, Iowa, will be held at 1:30 p.m. on Wednesday at Silver Lake Lutheran Church, rural Northwood. The Rev. Randy Baldwin will officiate. Interment will be in Silver Lake Cemetery. Visitation will be from 5 to 7 p.m. on Tuesday at Bonnerup Funeral Service, Albert Lea, and one hour before the service at the church. 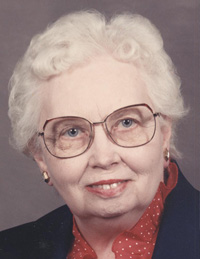 Wilma died on Sunday, April 24, 2011, at the Lutheran Retirement Home in Northwood at the age of 90.

She was born on Dec. 27, 1920, in Twin Lakes, the daughter of George and Selma (Hermanson) Reyerson. She was baptized Feb. 13 1921, at Lunder Lutheran Church, Twin Lakes. Wilma was confirmed May 6, 1934, at Silver Lake Lutheran Church. She attended Teachers College in Cedar Falls, Iowa and then taught rural school. On May 25, 1941, she married Olaf G. Kvam in Albert Lea. Wilma and Olaf had lived and farmed in rural Northwood. A few years after Olaf died in 1995, Wilma moved into Northwood. She had been a resident at the Lutheran Home in Northwood for the past year and a half. She was a member of Silver Lake Lutheran Church. She enjoyed baking, sewing, and playing her keyboard until her eyesight no longer allowed.

Wilma was a loving mother, grandmother and great grandmother. She will be greatly missed. Blessed be her memory.