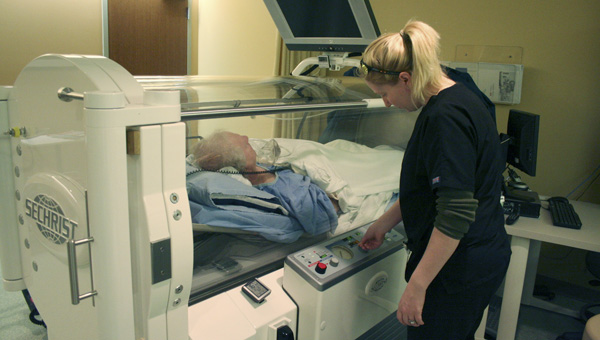 A department at Albert Lea Medical Center recently received an award for its healing rate and patient outcomes.

“We have specific care plans for patients,” said Kim Kirschbaum, program director for the wound care department in Albert Lea. 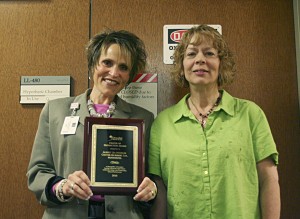 Kim Kirschbaum, program director at Albert Lea Medical Center’s Wound Care Center, poses for a photo with patient Kim Thompson. Kirshbaum is holding the award of distinction the center has received for the second year in a row. -- Kelli Lageson/Albert Lea Tribune

She said the award means the department had “outstanding patient outcomes” for 12 months, had patient satisfaction of more than 90 percent and an 89 percent healing rate within 30 median days.

The wound care center services people from up to 100 miles away and has had referrals from all over Minnesota and Iowa.

“It’s not common to have a specialized physician-run wound care center in your community,” Kirschbaum said.

The center, on the lower level of ALMC, has staff who work to heal chronic wounds. Kirschbaum said it’s unfortunate that so few people know the center is available. One patient, Kim Thompson, of Mason City, Iowa, said she was told by her doctor that she’d have to live with her deep tissue wound, which was a delayed side effect of radiation she’d had to treat cancer.

“I’m just glad I got up here and got the treatment,” Thompson said. “It’s something I refused to live with.”

Thompson’s treatment plan included 50 sessions of hyperbaric oxygen therapy. The treatment means Thompson laid in a chamber filled with pure oxygen. The therapy delivers high concentrations of oxygen to the bloodstream and helps the body heal wounds itself.

“I got much better,” Thompson said. “It really helped a lot.”

Because of the dangers of being in a pressurized chamber filled with 100 percent oxygen, Thompson said she was not able to wear any sort of beauty products or metals in the chamber. The treatment also has the same effects on the body as going on a deep-sea dive, so staff make sure patients are physically able and ready before going into the chamber.

Hyperbaric oxygen treatment was a success for Thompson, whose wound healed and no longer affects her like it had. Not all patients qualify for the hyperbaric treatment, and it’s one of many treatments available at the wound care center.

Kirschbaum said the center provides comprehensive care by building treatment plans for patients. They also track the size of each wound to monitor its progress as a team. Many times deep internal wounds occur up to years after receiving radiation, which is one type of wound the center works with.

“We’re trying to be proactive with radiation injuries,” Kirschbaum said. “Early intervention is the key.”

Each patient’s wound is unique, and Kirschbaum said that’s why they have specific treatment plans and work as a team to find ways to heal persistent wounds.