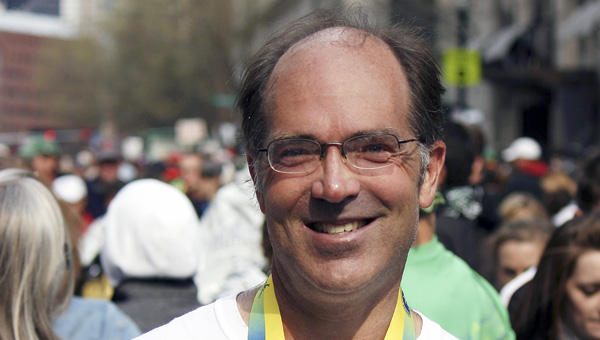 Bryce Gaudian, of Hayward, wears a medal after completing the Boston Marathon this spring. -- Submitted photo

For Bryce Gaudian, having running venues on both coasts within five weeks this spring was a made-to-order fundraising opportunity for two nonprofits he is passionate about working hard and sweating for.

Calling his campaign “Two Coasts — Two Marathons — Two Epicenters of Compassion,” Gaudian, of rural Hayward, sat down at the kitchen table of his farm home in late January, hand addressing envelopes and writing personal notes on over 500 letters he sent to potential donors across the country. The result: more than $21,500 was raised for Operation Smile, an organization that cares for facial deformities and repairs cleft lips and palates, and St. Jude Children’s Research Hospital.

Gaudian was invited by a friend to run in the Catalina Marathon on Santa Catalina Island, off Long Beach, Cali., on March 12. This marathon is ranked by Runners World Magazine as the No. 1 off-road marathon in the world.

The scenery was stunning and the course “insanely challenging,” according to Gaudian. There was more than 4,300 feet of elevation change throughout the 26.2-mile course and Gaudian “knew I was in for a treat when my ears popped within the first 2 ½ miles going up the mountainous trail.”

The average finish time for the marathon, which commences at Two Harbors and finishes in Avalon on the island is 5 ½ hours. Gaudian was thrilled to finish in 4:56:25.

At the end of the Albert Lea High School cross country season last Fall, where Gaudian volunteers as an assistant coach, he developed a neuroma in his right foot which made it excruciatingly painful to run and even walk. The injury sidelined him throughout the entire winter.

“I went into the Catalina Marathon with only having run about 30 miles in the five months leading up to the race,” Gaudian said.

That’s compares to the 800 miles Gaudian typically would have run in that stretch of time training for a marathon.

Dr. John Enger at the Community Foot Clinic in Albert Lea took Gaudian on as his own “special project” to get him to the starting and finish lines of both Catalina and Boston Marathons because of the fundraising efforts for two organizations.

Compounding the neuroma challenge in his right foot, a cold-induced vaso constriction in his left foot in early February was so painful, Gaudian couldn’t even put a shoe on that foot. His new advocate also helped remedy that set back. Donations began flooding in for the Two Coasts — Two Marathons campaign, and Bryce headed to the west coast to see what the almost complete lack of training would mean for him with two major marathons within five weeks of each other. Prevailing at Catalina, Boston loomed on the horizon.

The world-renowned Boston marathon is one that you have to qualify for, and in December 2009 at the St. Jude Memphis Marathon, Gaudian had a personal best marathon running experience and qualified for Boston with a time of 3:32:00. Last year, it took two months for the Boston Marathon field of 26,000 runners to fill up. However, this year, the field filled in one day. Gaudian was one of the lucky ones to get a spot. This year was the 115th running held on April 18, Patriot’s Day in Massachusetts. It ended up being a historic race. The 26.2 miles, which begin in Hopkinton and ended with the turn off Hereford Street to Boylston and into downtown Boston, found Geoffrey Mutai, of Kenya, covering the distance faster than any human being in history, in a blistering time of 2:03:02. Olympian, Ryan Hall, ran the fastest time for an American in history, crossing the finish line in 2:04:58.

“I was humbled and grateful to run Boston,” Gaudian said.

Having more than 500 people donate to his effort, he felt accountable to every one of them and “even if I would have had to crawl at some point, I was going to finish,” he said. It was nowhere near his qualifying time, but Gaudian did finish in 4:35:57 and learned a lot about enduring pain and persevering through hardship.

“It was extremely difficult, and I prayed the entire race just to finish, one mile at a time,” Gaudian said. “But how infinitesimally small was this achievement, only having to bear pain for 4 ½ hours, versus those who somehow endure unspeakable pain, hardship and hopelessness for years, or a lifetime, until organizations like Operation Smile and St. Jude come to their aid. These children and families are running their own marathons.”

“I stand in awe of the generosity of so many,” Gaudian said. “We are so inextricably linked together with so many diverse people we cross paths with in our lifetimes.”

Gaudian’s fundraising philosophy has always been “leave no stone unturned” and the scriptural principle “You have not because you ask not.”

The two marathons on both coasts within five weeks would have been challenge enough, but it was made all the more fulfilling by overcoming extreme foot pain and running the two coasts marathons with almost no training.

“I know that these two amazing organizations will use this money to help a lot of children and families who are really suffering,” Gaudian said. “That’s a true win.”

Gaudian hopes and prays to be whole soon, and would love to be able to lace up his running shoes with the cross country team this fall. “These young runners inspire me,” he said. “Running has always brought a lot of joy to me, and I hope that I can run for years to come.”

Gaudian encouraged others to “find something you love to do, that others can come alongside and financially support and encourage you in. It all adds up to help those in need. What could be a more beautiful and fulfilling an undertaking?”