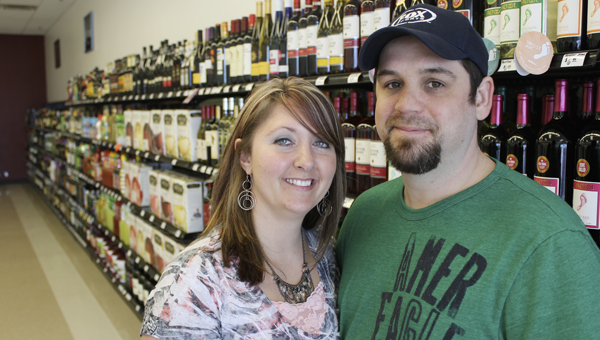 Trice and Trevor Studier of Glenville stand next to a wall of wine and liquor Friday at East Side Liquor. -- Tim Engstrom/Albert Lea Tribune

The idea for a liquor store came from their trips to town.

Trevor and Trice Studier of Glenville would drive to Albert Lea, shop for food and home supplies at Walmart, then drive to downtown Albert Lea to pick up liquor. It occured to them that if there was a liquor store near Walmart, they could get what they needed and zip back to Glenville.

“If they are like us they just want to jump back on the freeway,” Trice said. 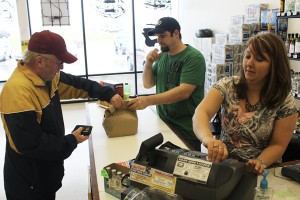 Trevor said that when the Cato clothing store closed in August 2008 at the strip mall south of Walmart, he and his wife inquired about a liquor store but found the rent for that space too high. However, when The Tobacco Store opened in November using half the space the Cato store did, the other half remained vacant. He asked again and found the price to be right.

They got their business plan together, got a loan, followed through on state and city requirements and East Side Liquor, 2314 Hendrickson Road, opened May 9.

“We did six months of paperwork,” Trevor said.

Having a liquor store next to a tobacco place is convenient for many people, Trice said. “Tobacco and alcohol go hand in hand.”

Customers making a purchase get a free bag of ice, and there is a senior discount on Tuesdays.

Trevor works at the Poet ethanol plant and Trice runs a home-based day care. They also have three sons — Logan, 10, Griffin, 8, and Whitney, 4. They are going to be busy getting the store off the ground, as both will keep their day jobs. All of their employees so far are his mom and her sister.

The store presently has a cooler with a variety of chilled beverages, a long wall lined with wine, wine coolers and hard liquors and a shelf with just wine. There are stacks of domestic beer, and a shelf behind the cash register. The store’s center space is open floor.

Customers can expect changes, Trevor said. More shelving is on the way, and he hopes to attract fans of wine and craft beer, particularly because Collective Spirits, a supply store for making beer and wine at home, is a block away.

A grand opening is in the works, but no date is set.

In addition to Walmart shoppers, East Side Liquor also gets people off the freeways.

Trevor said many of them are fishermen or other people on vacation heading north. Often they are travelers who stop at Trail’s Travel Center or Love’s and decide to pick up some supplies without getting far away from Interstate 35.