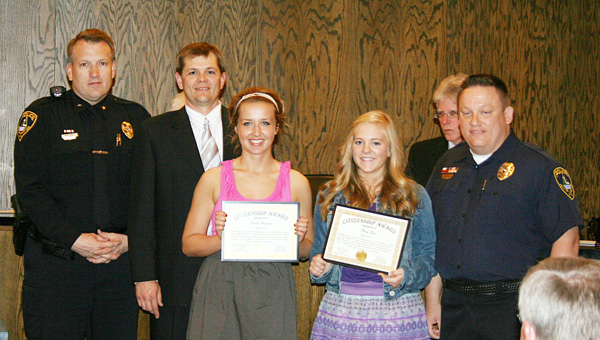 These awards were presented for their involvement in the “Every 15 minutes” project at the Albert Lea High School. The students met every week before and after school from November to April to plan the project. During one day at school, every 15 minutes, a student is taken from class and their obituary was read. The student was then marked and unable to speak to anyone for the rest of the day. This is a graphic reminder that every 15 minutes, someone dies in an alcohol related crash.

High School Liaison Officer Ted Herman, who worked closely with the students, said, “Macy and Brooke approached me at school and asked if I would help them bring the “Every 15 minutes” program to the students. I agreed to be a co-coordinator if they would commit the time it takes to put a program like this on. Without hesitation they both said yes. The program was extremely successful and it was all due to Macy and Brooke’s dedication to educating their fellow students about the consequences of drinking and driving. I can’t say enough good things about them.”