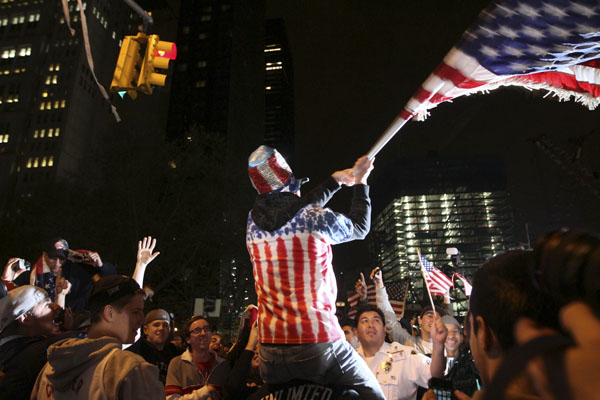 Perched on another’s shoulders, Ryan Burtchell of Brooklyn, center, waves an American flag over the crowd as they respond to the news of Osama Bin Laden’s death early this morning by ground zero in New York. President Barack Obama announced Sunday night that Osama bin Laden was killed in an operation by the United States. -- Tina Fineberg/Association Press

Revelers gathers at ground zero in New York and near White House in D.C.

NEW YORK — Joyous at the release of a decade’s frustration, Americans streamed to the site of the World Trade Center, the gates of the White House and smaller but no less jubilant gatherings across the nation to celebrate the death of Osama bin Laden — cheering, waving flags and belting the national anthem.

Ground zero, more familiar these past 10 years for bagpipes playing “Amazing Grace” and solemn speeches and arguments over what to build to honor the Sept. 11 dead, became, for the first time, a place of revelry.

“We’ve been waiting a long time for this day,” Lisa Ramaci, a New Yorker whose husband was a freelance journalist killed in the Iraq war, said early Monday. “I think it’s a relief for New York tonight just in the sense that we had this 10 years of frustration just building and building, wanting this guy dead, and now he is, and you can see how happy people are.”

She was holding a flag and wearing a T-shirt depicting the twin towers and, in crosshairs, bin Laden. Nearby, a man held up a cardboard sign that read, “Obama 1, Osama 0.”

Uptown in Times Square, dozens stood together on a clear spring night and broke into applause when a New York Fire Department SUV drove by, flashed its lights and sounded its siren. A man held an American flag, and others sang “The Star-Spangled Banner.”

The throng in D.C. grew after President Obama’s announcement, and within a half-hour had filled the street in front of the White House and begun spilling into Lafayette Park.