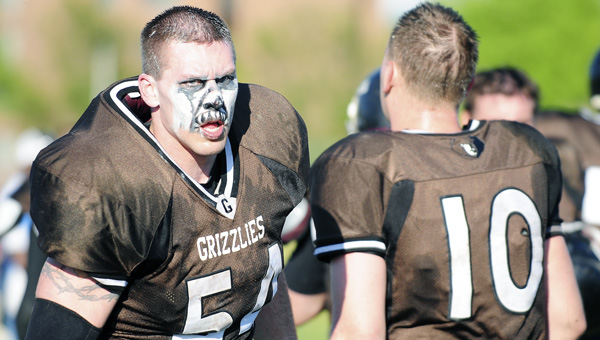 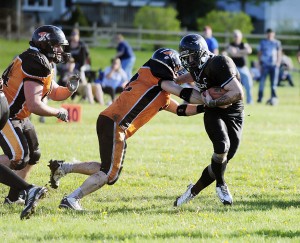 “When the two best teams in the league match up as well are ours do, you know going in that the fans are going to have a great game to watch,” Grizzlies coach Steve Piper said.

Around 200 fans watched from the sidelines in camp chairs. Some brought dogs, some kids and some tossed a football back and forth as the Grizzlies built a 14-6 lead heading into halftime.

In the first quarter, Grizzlies quarterback Tony Tolbers passed to Jake McClaskey for a touchdown. It was the first points scored on the Hawgs defense this season.

Tied 6-6 after the first quarter, Tolbers passed to tight end Ross Anderson at the beginning of the second, who was stopped just shy on the end zone. On the following play, Tolbers scored on a quarterback sneak and added two more points after he connected with Jared Matson across the middle on the conversion attempt.

After a strong defense stand near the end of the second quarter, the Grizzlies had momentum heading into the break but were outscored 18-6 in the second half. 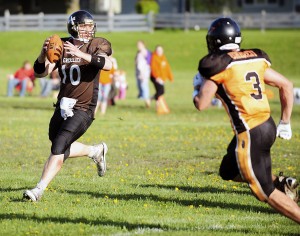 Grizzlies quarterback Tony Tolbers drops back to pass Saturday during the second quarter of a 24-20 loss. -- Andrew Dyrdal/Albert Lea Tribune

In the third quarter, the Grizzlies stripped the ball from the Hawgs near the home goal line but were hit with a safety on the next play when a ball carrier was tackled inside the endzone.

On the Grizzlies’ next drive, the Hawgs forced a fumble, recovered it and returned it for a touchdown to take a 16-14 lead. The Grizzlies answered quickly, though, when fullback Paul Mathern scored on a two-yard carry with 1 minute and 20 seconds left in the third.

The fourth quarter was all about defense as both team’s held each other scoreless until the final drive of the game.

With 90 seconds left in the game, the Grizzlies turned the ball over on downs and the Hawgs (4-0) went on their best offensive drive of the game. The Grizzlies’ defensive line of Chris Hable, Carl Shurson and Andrew Peterson kept the Hawgs’ ball carriers out of the endzone but on fouth-and-1 with seven seconds left, the Hawgs finally broke the goal line to lead 24-20.

On the ensuing kickoff, the Grizzlies (3-1) threw laterals back and forth but were unable to score as time ran out.

“I can’t take anything away from my guys,” Piper said. “They played a great game. We just came up a little short at the end.”

The Grizzlies play again at 6 p.m. Saturday against the Buffalo Ridge Wildcats (2-2) at Southwest Middle School.