Funeral services for Beverly Mae Farr, age 78, of Geneva will be held at 11 a.m. Saturday at Community Lutheran Church. The Rev. Carrie McElfresh will officiate. Interment will be at the Geneva Cemetery.  Visitation will be from 4 to 7 p.m. today at Bayview/Freeborn Funeral Home and one hour prior to the service at the church. To sign the guest book, go to www.bayviewfuneral.com. 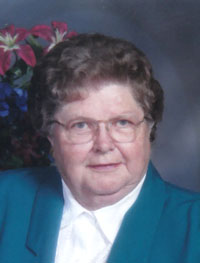 Beverly Mae (Chrs) Farr was born on April 7, 1933, at Naeve Hospital to Eddie and Netta (Madson) Chrs. She attended country school District 116. Beverly was confirmed at First Lutheran Church in Albert Lea. She graduated from Albert Lea High School in 1951. Beverly graduated from Hamilton School of Commerce in Mason City, Iowa. On Feb. 20, 1955, she married Amos B. Farr at First Lutheran Church in Albert Lea. Beverly was a member of the Community Lutheran Church in Geneva where she was active in WELCA. She was also a member of the Geneva Senior Citizens, Newry Merry Homemakers and 2:00 Coffee Club. She enjoyed cake decorating, baking, embroidery and jigsaw puzzles. Her favorite pastime was meeting her friends for coffee and breakfast. Beverly treasured the time spent with her children and grandchildren.

Beverly was preceded in death her parents; husband, Amos; and sister Marjorie Carlsgaard.