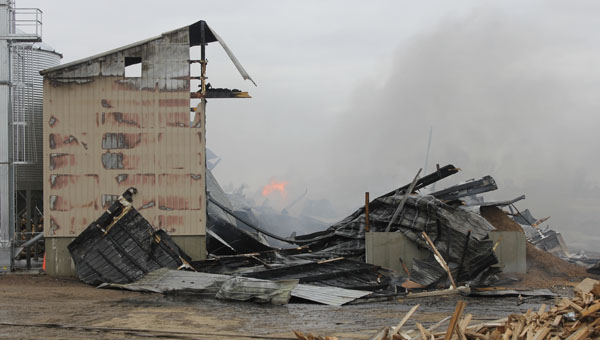 They were able to contain the fire to the building in which it started, despite high winds and nearby structures. No one was injured.

“Anytime we are able to do something like that, it makes us feel pretty good,” said Clarks Grove Fire Chief Carl Anderson. 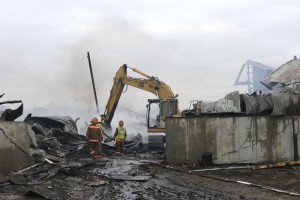 Mike Peterson operates an excavator Sunday morning while firefighters douse flames. The excavator was brought in as part of an effort to get at a hot spot. -- Tim Engstrom/Albert Lea Tribune

The call for the fire went out at 6:43 a.m. The Clarks Grove Fire Department was the lead agency. It was assisted by fire departments from Geneva, Albert Lea, Albert Lea Township, Alden, Hayward, Freeborn, Manchester and Hartland and by the Naeve Hospital ambulance.

Flames shot out the north side of the building when firefighters arrived, Anderson said.

Even with the nine fire departments bringing water, more was needed. In addition to excavating, Peterson Excavating also is a commercial recycler. The building on fire had pellets for wood-burning stoves and plastic twine inside.

Tanker trucks coordinated efforts to haul water to the scene. 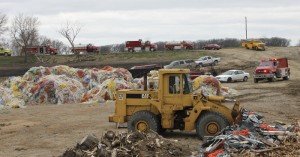 That meant some of the trucks were driving down Bridge Avenue to fill up at city hydrants at Crossroads Church and along Plaza Street near the AmericInn. It’s not often Albert Lea motorists see, for instance, a Hayward fire truck, lights flashing and horns blaring, heading down their city streets.

Anderson said he didn’t know how it started and was going to meet with a fire marshal yet Sunday morning.

He said he appreciated that the Salvation Army came out with its truck to offer doughnuts, breakfast bars, chips, coffee and juice to the firefighters, many of whom had not eaten a morning meal by the time they were called into action.

Owner Mike Peterson said the structure was insured, and he estimated the loss at about $1 million. In addition to holding pellets for wood-burning stoves and plastic twine, the building had recycling equipment, a conveyor and a loader inside.

Peterson Excavating also does business as I-90 Recycling.

He said he intends to rebuild and was thankful the firefighters preventing the blaze from spreading. He, too, didn’t know what could have started the fire.

Peterson himself helped fight the fire, getting inside a yellow Case excavator and digging out a hot spot while firefighters hosed down the remaining flames.

The wind speed around 7 a.m. was 17 mph with gusts up to 31 mph, according to the automated weather station at the Albert Lea Municipal Airport. The air temperature was 34 degrees.

Check back to AlbertLeaTribune.com later for a photo gallery.