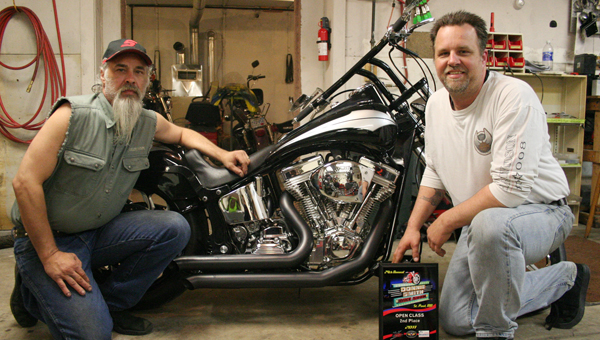 Larry, left, and Justin Doyle pose for a photo by a custom-built Harley Davidson Softail they built that received second place in the Donnie Smith Bike Show in St. Paul. The brothers own Doyle’s Custom Cycle in Albert Lea. -- Kelli Lageson/Albert Lea Tribune

Two brothers who both like motorcycles and each have different skills recently came together to start Doyle’s Custom Cycle in Albert Lea.

Larry Doyle said he’s been fixing and customizing motorcycles for more than 20 years. His brother, Justin, has worked in autobody work for about 15 years and has painted motorcycles for about 12 years. With each having their own area of expertise, they can offer more services to customers.

Some of the services available are rebuilding of motors or transmissions, regular service work, tires, parts and accessories and customization. With newer bikes having computerized parts, Larry and Justin have had to get digital tools to keep up with the technology.

“We have the capability of working on the newer bikes,” Justin said.

They go through about five dealerships to get parts and accessories, and Harley Davidson parts are also available. Larry said there’s not much they can’t do to fix motorcycles.

“We basically try to do everything in house,” Larry said.

With winter over, business has picked up for the shop because people want to get out on their bikes. Larry and Justin each own a custom-built Harley Davidson Softail, which they said they like because there are many different ways to customize them. Recently they won second place at a Donnie Smith Bike Show in St. Paul for a custom-built Harley Davidson Softail they built.

Customers have been coming to Doyle’s Custom Cycle from all over southern Minnesota. Both Justin and Larry said they hope to grow bigger in the coming years. Right now they do all the work themselves, and have other help only when needed. 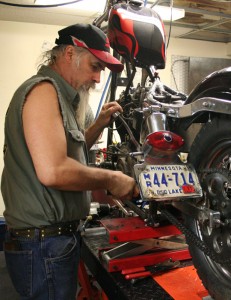 Larry Doyle works on a custom chopper with a pan shovel motor, stretched frame and 10-inch over springer. He plans to rewire the bike, install a new oil tank and distributor and sprockets to get it “road ready.”

For now Justin said business is going well, and they both like their location on the west side of Albert Lea in the former KATE radio building on West Main Street. They recently installed a sign on the north side of the building that can be seen from West Main Street.

“We have an excellent location in town,” Justin said.

Larry said he’s worked on motorcycles for many years because of his passion for motorcycles and the people he’s met through being an avid rider. He said he also enjoys when he can go above and beyond a customer’s expectations. Justin is also a motorcycle rider and enjoys working on custom paint jobs for customers. He does all different kinds of designs to customize motorcycles.

“It all depends on what the customer wants,” Justin said.

The brothers thanked Tom Leland, owner of the building on West Main Street, for helping them get started with their business.