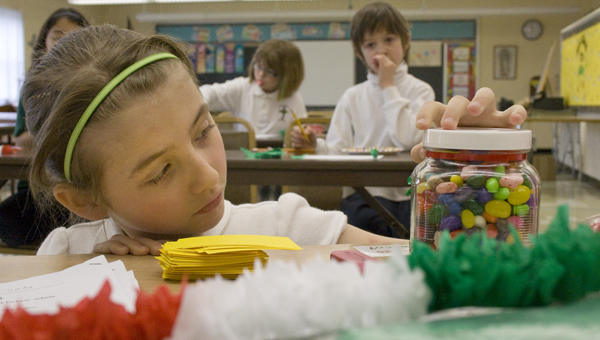 Josie Bolinger, a second-grader at St. Theodore Catholic School, guesses how many jelly beans are in a jar Thursday as part of a Cinco de Mayo game at the school. The person who guessed closest to the actual number of jell beans in the jar would win the jar of candy. -- Sarah Stultz/Albert Lea Tribune

Students in kindergarten through sixth grade at St. Theodore Catholic School took a little time out of their school day Thursday to celebrate a holiday from the Mexican culture.

Cinco de Mayo means the Fifth of May in Spanish. The day commemorates the Mexican army’s unlikely victory over the French at the Battle of Puebla on May 5, 1862. 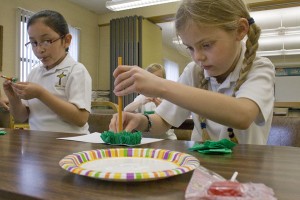 As part of the holiday, students played a game and decorated Mexican flags during their Spanish class. Younger students colored.

Spanish teacher Aimee Chalmers had taught the students about the history of the day previously to allow time for the activities. She compared the battle the Mexicans won to the Bible story of David and Goliath.

“I try to do more hands on, involvement kind of stuff because it helps it sink in,” Chalmers said.

The students showed excitement about the activities, especially one called “Cuantos frijoles hay en el frasco?” where the students had to guess how many jelly beans were in a jar. Kids from all grades wrote their guesses on a little slip of paper and then by the end of the day the person who got closest to the amount received the entire jar, plus the candy inside.

While the students took turns guessing how many jelly beans were in the jar, they started making Mexican flags out of colored tissue paper.

A few students said they planned to continue their Cinco de Mayo celebration after school by eating some of their favorite Mexican foods.

Second-grader Cynthia Herrera, daughter of the owners of Plaza Morena restaurant, said she planned to go to her family’s restaurant after school, dress up and even maybe wear a sombrero during a celebration.