The memorial service for Cora Olive Peterson, of Albert Lea, will be held at 1:30 p.m. Tuesday at the United Methodist Church in Albert Lea. The Rev. Tom Biatek will officiate. Interment will be in Graceland Cemetery. Friends may visit with family from 4 to 7 p.m. Monday at Bonnerup Funeral Service and one hour before the service at the church. 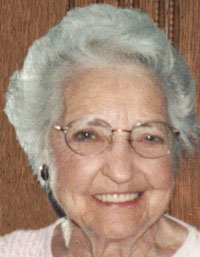 Cora Olive was born Dec. 29, 1911, on a farm in Hartland Township, the daughter of William C. and Nettie (Floyd) Robinson. She attended country school and was a 4-H member, showing livestock in the Freeborn County and Minnesota State Fairs. Cora graduated from Albert Lea High School with the class of 1930. She married Norris O. Peterson on March 28, 1935.

Cora was a member of the United Methodist Church, where she had always been very active including teaching fourth grade Sunday school for 35 years and securing the “Greeters” for more than 50 years. She had been active member of the Family Y all of her married life and beyond. Cora spent much of her time volunteering for the church and her community. In addition to the church, her volunteer efforts included the Cancer Society, the Red Cross, the Art Center and Semcac to name a few. Some of her favorite things included family Christmas dinners, visiting friends in rest homes, baking pies and entertaining friends and family. Cora had opportunity to travel to every state in the U.S., 15 European countries and 30 trips to Switzerland to visit her daughter and husband and grandchildren.