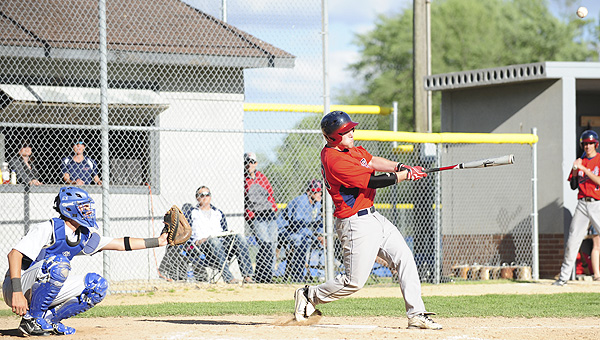 WELLS — The United South Central Rebels baseball team had a knack this season of scoring runs and winning without generating many hits. On Tuesday, that wasn’t the case.

The Rebels had nine hits but failed to score a run in a season-ending 4-0 loss to Mankato Loyola in the Section 2A quarterfinals at Thompson Park in Wells.

The Rebels left 10 runners on base, including the bases loaded in the fifth inning, and stranded eight in scoring position.

“We had our opportunities to score we just didn’t get it done,” Rebels coach Pat Frank said. “If you’ve seen how we played all season to think we’d get nine hits and not score a run … we just left guys on base today.”

The Rebels had their biggest opportunity in the bottom of the fifth inning when Crusaders starting pitcher Zach Mullin, who had been stellar all game, began to falter.

Trailing 3-0 with their bottom three batters due up, the Rebels (12-7) put together a two-out rally.

David Stenzel grounded out and Walker Linde struck out to start the inning before Mullin threw six straight balls and walked Trey Allis and Eric Lackey on 3-1 counts.

Dustin Dylla singled to left field to load the bases, but Tyson Morton flew out to center field to end the inning.

In the bottom of the sixth, Jason Huper singled to left with one out and stole second as Lucas George struck out swinging. Stenzel singled to move Huper to third but Linde popped out to shortstop to end the rally.

Trailing 4-0, the Rebels threatened again in the bottom of the seventh inning with two outs after Dylla hit a bloop single to left field, and Morton doubled to the left-center gap. With two runners in scoring position, Anthony Stenzel struck out swinging to end the game and the Rebels’ season.

“The kids competed hard,” Frank said. “I’m really proud of them. It was a great group to work with.”

Frank said nobody gave the Rebels a chance this season after graduating six Gopher All-Conference players. Regardless, the Rebels finished third in the Gopher Conference and won six of their final eight games, including seven straight regular season conference games.

Stenzel and the Rebels ran into trouble in the fifth, though, as high winds moving in from right field to left field caused problems in the outfield.

Ike Hermer led off the fifth inning with a single to center field and moved to second off a sacrifice bunt by Andrew Sweere.

Kyle Reynolds then hit what looked like a routine fly ball to left field that pulled left and away from the Rebels’ rightfielder, scoring Hermer.

After Jacob Clements popped out for the second out, Blake Matuska doubled, and Evan Ellingworth singled to shallow left to score two more.

The Crusaders led 3-0 after the fifth inning.

In the top of the seventh, the Crusaders added an insurance run off a throwing error by shortstop Lackey before Mullin closed the door in the bottom of the inning.

The Crusaders (12-7) play Thursday against Lake Crystal-Wellcome-Memorial in the Section 2A Final Four in Mankato.