The funeral service for Daniel Porter Erickson will be held at 11 a.m. Friday at Trinity Lutheran Church, Albert Lea. The Rev. Curtis Zieske will officiate. Visitation will be one hour before service at the church. Interment will be in the Graceland Cemetery. Military honors will be accorded by the Albert Lea area veterans organizations. 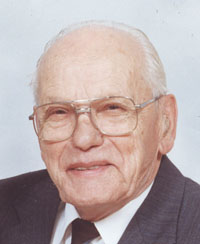 He attended public schools in Jackson. He was baptized in 1923 and confirmed in 1935 and was a member of Trinity Lutheran Church. Daniel served his country in the U.S. Army during World War II. Daniel had lived in Wilmer and Jackson before moving to Albert Lea in 1950. Daniel was married to Ethel (Lorraine) Melvin on Oct. 7, 1950, in Fairmont. He had worked for Wilson & Co. for 34 years before retiring in 1982.

Daniel enjoyed gardening, flowers, watching birds, camping with family, woodworking, puzzles, fishing and watching all sports. His grandchildren and great-grandchildren were a very important part of his life, and he cherished the time spend with them.

Daniel was preceded in death by his parents; son, Douglas; brother, Einar Erickson; sisters: Vivian Schnitzmeier and Myrtle Walling; two brothers and one sister in childhood.