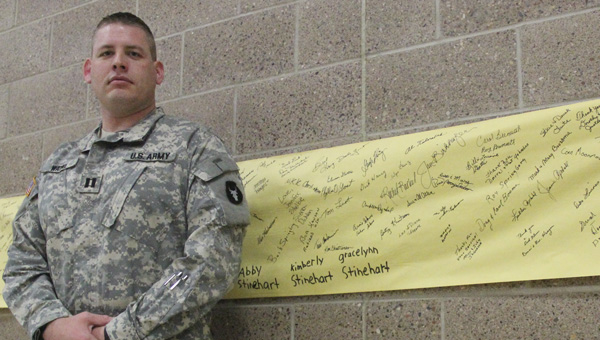 Capt. Steven Wayne stands by a banner signed by families of local troops who will be deployed to Kuwait this summer. -- Kelli Lageson/Albert Lea Tribune

Meet the new leader of the Albert Lea National Guard unit who will lead local soldiers during their upcoming deployment to Kuwait.

Capt. Steven Wayne, 34, received command from Capt. Sam Andrews in a ceremony held at the end of April. Wayne joined the Army Reserves in 1994 as a mechanic.

Wayne has since served in Korea and been part of Operation Ice Eagle, which provided airport security after the 9/11 attacks, and Operation Jump Start, which sent National Guard troops to the U.S. border with Mexico, throughout his years in the Army. He switched to the National Guard and went to officer candidate school because he knew he wanted to be a leader.

Wayne also served as a battalion logistical officer in Mankato. He was asked if he was interested in the position of commanding Albert Lea’s unit.

He also makes sure his troops have the correct uniforms and equipment, as well as managing food and housing.

A River Falls, Wis., native, Wayne said he enjoys Minnesota for all the opportunities for hiking, camping, hunting and other outdoor activities. He said the amount of state parks and land that’s accessible for recreational activities are some of his favorite things about the state.

Wayne went to school at the Minnesota School of Business and is not married and has no children. He said he likes traveling and meeting new people with the Army. Wayne also likes teaching soldiers and watching them succeed.

“I like watching them do things they thought they couldn’t do,” Wayne said.

Albert Lea’s unit is Delta Company, 2nd Battalion, 134th Brigade Support Battalion, within the 34th “Red Bull” Division. Soldiers from Delta Company will deploy with about 2,400 soldiers from six different battalions of the First Brigade Combat Team to Kuwait. They are training at Camp Ripley in Little Falls. The unit will be back in Albert Lea for a departure ceremony at the Albert Lea Armory at 10 a.m. May 31.

The unit will then travel to Fort McCoy in Wisconsin for more training and begin being deployed to Kuwait in late July. The soldiers are going to support Operation New Dawn, a mission to safely remove troops and equipment from Iraq that were used in Operation Iraqi Freedom.

“We’ll be providing security for the drawdown,” Wayne said.

This deployment will be the second-largest for the Red Bulls since World War II.