Farmer named Citizen of the Year 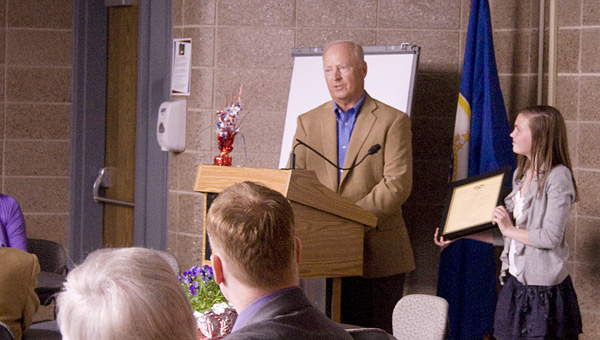 David Jensen, of rural Clarks Grove, speaks Wednesday afternoon after being recognized as the District 241 Citizen of the Year. Standing next to him is his granddaughter Sydney Doran, who nominated him for the award. -- Sarah Stultz/Albert Lea Tribune

A rural Clarks Grove man described as having a caring heart and a love for helping others was named District 241’s Citizen of the Year on Wednesday during a special ceremony at Riverland Community College.

Nominated by his granddaughter, Sydney Doran, David Jensen said he was surprised and humbled to receive the award.

“When I think of citizens of the year, I think of firemen, policemen, doctors …” Jensen said. “But I also think of teachers. Teachers are the backbone of America.” 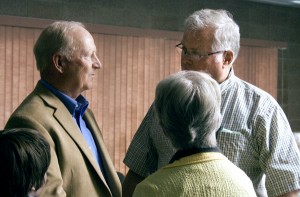 He asked the students present to reward their teachers by being good students.

Jensen, who has farmed for most of his life, is the 35th recipient of the award, which is given out annually.

The Citizen of the Year Award began in September 1976 and is expected to continue through May of 2076. The purpose of the award is for students to seek out examples of good citizenship and good role models, said Nancy Royce, chairwoman of the citizenship committee.

Each spring, nominations are gathered and the winner is chosen by the district’s citizenship committee, which is made up of four students from each of the elementary schools in the district, plus a few adults.

His nomination states Jensen has been helping out in District 241 for many years, including installing the picnic tables at the front of Lakeview Elementary School, raking the walking path at Lakeview School and visiting the sick and dying.

Jensen is also described as a man who loves his grandchildren and who will do anything for them.

After being given the award, Jensen gave a brief speech.

He advised the students to make wise choices and to learn as much as they can. He also encouraged them to start participating in projects to help others.

“Keep your eyes and ears open for something you can do to help others,” Jensen said.