Remember soldiers and their families 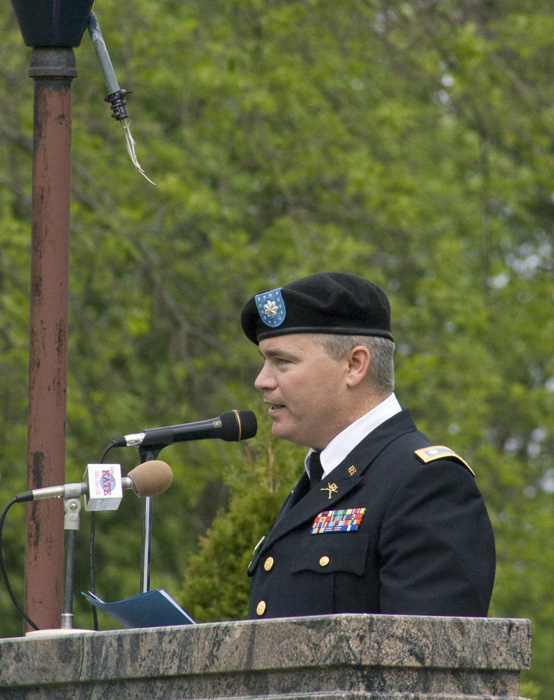 On the eve of the second-largest deployment of the Minnesota National Guard since World War II, Freeborn County residents were reminded Monday to remember not only the local soldiers who will be departing but also the soldiers’ families who will be staying behind during their service.

During a Memorial Day ceremony at Graceland Cemetery, Lt. Col. Mike Funk addressed several hundred people about the upcoming deployment and the character of the people who are willing to give the ultimate sacrifice for their country.

Funk said the soldiers of the Delta Company, 2nd Battalion, 135th Infantry Regiment, 34th Infantry Division, are members of one of the finest battalions. Since 2004, the company has served in Afghanistan, Kosovo and now Kuwait.

Funk reassured the people in attendance that the soldiers are well trained and prepared for their new assignment.

Funk, who formerly served as commander of the 2nd Battalion, 135th Infantry Regiment, is the superintendent of Albert Lea schools. Because of a recent change in Funk’s position, he will not be deploying with the soldiers.

He asked people in attendance to remember to assist the families of deployed soldiers with what may seem like simple tasks such as mowing the lawn, shoveling sidewalks or watching their children. Funk said the family members, like their soldiers, are competent people who are also “fiercely independent.” By making sure the families are taken care of, the soldiers can focus on their assignments.

He left the soldiers with three pieces of advice: first, expect the best; second, train like you fight; and third, do the right thing.

“Your actions in a foreign land will be judged worldwide,” he said.

The cemetery service followed a Memorial Day parade with members of various veterans organizations and other emergency organizations.

The Minnesota National Guard soldiers were the grand marshals of the parade.

“We’re proud of them,” said Tanya Henderson, the wife of soldier Michael Henderson. “They’re strong and we have to be strong for them.”

Henderson said she and her husband have three children. They were in attendance at the various events Monday.

Following the service at the cemetery, there was a luncheon for the soldiers and their families at the Albert Lea Moose Lodge.