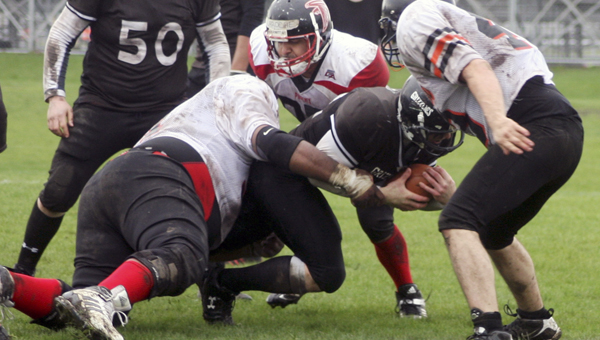 Albert Lea Grizzlies running back George Gerdes plows into the endzone Sunday against the Minnesota Silverbacks in Burnsville while Ross Anderson, left, and E.J. Knight watch. The Grizzlies beat the Silverbacks 32-6. -- Submitted photo

The Albert Lea Grizzlies won their second consecutive game to open the season Sunday 32-6 over the Minnesota Silverbacks in Burnsville.

Playing on a wet, slippery field, the Grizzlies’ defense, anchored by noseguard Chris Hable, held the Silverbacks option offense scoreless until the final seven seconds of the game. The Silverbacks sneaked the ball in the endzone for the game’s final six points.

The Grizzlies’ offense moved the ball well for most of the game with George Gerdes and E.J. Knight grinding out yards on the ground. Knights scored the first touchdown of the game in the second quarter, and tight end Ross Anderson caught a pass in the middle of the endzone for the two-point conversion.

Quarterback Tony Tolbers ran in the Grizzles’ second touchdown from the one-yard line. The touchdown was followed by another successful two-point conversion and the Grizzlies led 16-0 at halftime.

In the third quarter, Gerdes scored another touchdown and fullback Paul Mathern caught a quick pass for the two-point conversion.

Early in the fourth quarter, Tolbers passed to Jake McClaskey for the Grizzlies’ final touchdown and a 32-0 lead.

“Gerdes did a great job of running the ball for us,” Grizzlies coach Steve Piper said. “He had a lot of yards, a touchdown, a two-point conversion and no fumbles on a wet field. You can’t ask for much more than that from your running back.”

The Grizzlies play again at 6 p.m. Saturday on the high school’s junior varsity field in the Hammer sports complex. The gave was moved from Southwest Middle School because of water on the field.