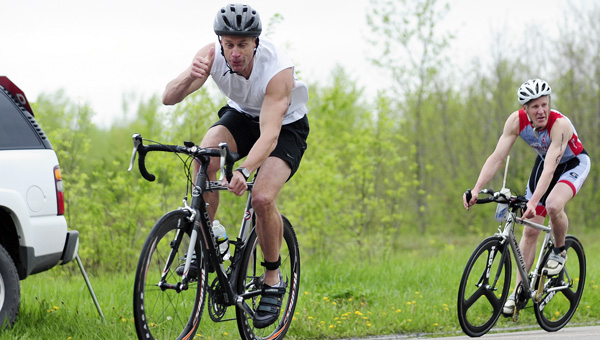 A bicyclist gives a thumbs up Sunday morning as he heads north on Richway Drive during the seventh annual Land Between the Lakes Triathlon. -- Andrew Dyrdal

Triathletes powered through rough water and high winds Sunday during seventh annual Land Between the Lakes Triathlon in Albert Lea.

“He was phenomenal,” Merfeld said, of Janicki. “He blew away the field.”

Triathlon co-director Steve Merfeld said poor weather may have “shyed away” some competitors but the overcast skies were good for the race. It was 61 degrees with 13 mph winds when the triathlon began at 9 a.m.

“We didn’t have heat-related issues like we’ve had in the past,” Merfeld said. “The water temperature was prety good but the bike course was extremely windy.”

Merfeld said Sunday was an “overall great day” and that rain held off until the triathlon was over and everything was cleaned up. He said there were over 100 volunteers and the event was co-directed by Dennis Dieser and Scott Erlandson.

Complete triathlon results were not available as of press time.