Kenneth Haukoos, 75, of Walters, died Monday, May 9, 2011, at his home in Walters. Funeral service will be held at 11 a.m. Thursday at United Lutheran Church, Walters. Visitation will be Wednesday from 4 to 7 p.m. at Bruss-Heitner Funeral Home in Wells, and will continue one hour prior to the service at the church on Thursday. The Rev. Donald Rose will officiate and burial will take place in United Lutheran Cemetery, one mile west of Walters. 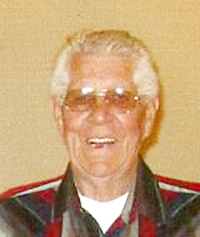 Kenny was born Sept. 3, 1935, on the family farm near Brush Creek, in Faribault County, the son of Russell and Emma (Hauskins) Haukoos. On Nov. 11, 1961, he was united in marriage to Marilyn Rebelein in Walters. He drove truck for many years for different companies, including Elsworth, Streater and Becker Highway Freight out of Albert Lea. He enjoyed visiting with his children and grandchildren, and going for coffee.

He was preceded in death by his parents; parents-in-law John and Hulda Rebelein; brother, Jim Doty of Albert Lea; two sisters: Ruth Ballou of Randall and Dorothy Rodriguez of Wells; brothers- and sisters-in-law: Lorettta and Bud Wacholz, Virginia and Robert Olson, Floyd and Norma Rebelein, Maynard Sauk and Floyd Adkins.