Private funeral services will be held for Kinsler G. Grube of Glenville who died Sunday morning, May 29, 2011, at St John’s Lutheran Home in Albert Lea. Public visitation will be held from 4 to 6 p.m. Wednesday evening at the Bonnerup Funeral Service Chapel. Interment will be in Concordia Lutheran Pickerel Lake Cemetery. 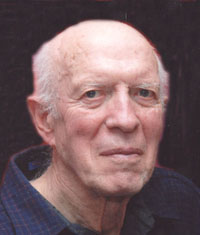 Kinsler was born Sept. 29, 1924, in Freeborn County, the son of Lawrence and Rose (Sandman) Grube. He was a graduate of Albert Lea High School in 1942. He served in the US Army during World War II and was honorably discharged.

On July 11, 1953, he was united in marriage to Jean Behrends at the Concordia Lutheran Church of Pickerel Lake. Together they farmed for many years and for a short time he worked at the Wilson Co. in Albert Lea.

Kinsler was a member of the Bethlehem Lutheran Church where he served as a deacon. He was active in the Albert Lea and Glenville Senior Citizens and a member of the VFW.

Kinsler loved to fly and held his private pilots license. He also enjoyed softball and pitched for a local team for many years. At times he could be found playing cards with family and friends.

Kinsler is survived by his wife, Jean, of Glenville; children: Janet (Glenn) Gaylord of Blue Earth and their daughter, Stefanie (John) Jaquette, Jacquelyn (Ralph) Grube Berthene of Lakeville and their children: Laura and David, Daniel Grube of Albert Lea and Paul Grube of St Michael and his children: Breanna and Brittney. There are two brothers surviving: Clair (Sally) Grube of Seattle, Wash., and Rudolph Grube of Westwood, Mass.; brother and sister-in-law: David and Mary Behrends; sister-in-law, Delores Niebuhr; and many nieces and nephews.

Kinsler was preceded in death by his parents and sisters-in-law: Marilyn Grube and Jane Grube.