Funeral services for Margaret Genevieve MacKay, 83, of Albert Lea will be held at 10:30 a.m. Thursday at St. Theodore’s Catholic Church. The Revs. James Berning and Mike Ellis will officiate. Interment will be at St. Theodore’s Cemetery. Visitation will be from 4 to 7 p.m. Wednesday at Bayview/Freeborn Funeral Home and one hour prior to the service at the church. To sign the guest book, go to www.bayviewfuneral.com. 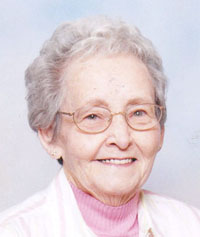 Margaret Genevieve MacKay was born on Sept. 8, 1927, to Henry and Mary (Carey) Lair in Albert Lea. She attended Emmons High school for three years and graduated from Albert Lea High School in 1945. On June 11, 1951, she was united in marriage to Joeseph MacKay in Albert Lea. Margaret was employed as a sales clerk at Gilbertson Furniture. She was a member of St. Theodore’s Catholic Church and active in CCW. Margaret was also a member of the American Legion Auxiliary and VFW Auxiliary. Margaret played on the same 500 club for 49 years. She enjoyed caring of others and was an avid fan of the Minnesota Twins. Blessed be her memory.