No doubt in their hearts 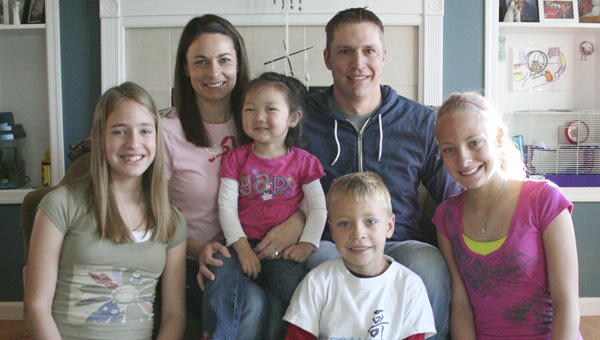 Jeanette and Aaron Phillips pose for a photo with their four children, from left are Morgan, Faith, Andrew and Madeline. -- Kelli Lageson/Albert Lea Tribune

One local mother said she’s so happy with her life she doesn’t think she could have dreamed it to be any better.

Jeanette Phillips lives with her husband, Aaron, and their four children in Albert Lea.

“I love watching the kids grow up,” Jeanette said.

Jeanette and Aaron are parents to Madeline and Morgan, 12-year-old twins, 6-year-old Andrew and 2-year-old Faith. They met on their first night of college at the University of Wisconsin — River Falls and have been together ever since. Aaron is originally from Hartland, and Jeanette and he moved around for his job before settling in Albert Lea in 2002.

Aaron’s parents, Dale and Val Phillips, of Hartland, help out with the kids a lot because Aaron works frequently and Jeanette owns her own business.

“All four have a close relationship with them,” Jeanette said.

Her family in Wisconsin is only three hours away, and Jeanette said they like where they’re at in Albert Lea.

After raising the twins and seeing them off to kindergarten, Jeanette thought the house was too empty. That’s when Andrew came along.

“I needed another kid at home,” Jeanette said with a smile.

She said Madeline and Morgan get along well and always had each other to play with at home. In some ways, Andrew was like an only child because he had his mother’s full attention.

“It was fun having time with him,” Jeanette said.

Jeanette and Aaron had talked about possibly having four children, and after talking with friends who had adopted they felt it would be a good fit for them.

“There was no doubt in our hearts it was what we needed to do,” Jeanette said.

She described adoption as a long journey with many obstacles. Just the starting paperwork took about a year, and they were finally matched with Faith (whose Chinese name is Mei Mei) in January of 2010. They weren’t able to finish the process and pick her up in China until October.

To prepare for the transition Jeanette read books, researched online and talked with as many people as she could about adoption. What she wasn’t prepared for was how smoothly the transition was for Faith.

“She belonged right away,” Jeanette said.

Jeanette and Aaron traveled to Faith’s birth province of Ganzu in northern China, where they completed the last of the adoption process. Even though Jeanette feared Faith would be shy or only bond with one parent, Faith was attached to both Jeanette and Aaron right away. She also bonded with her new siblings and accepted them all right away. The Phillips wish to honor Faith’s birth and foster mothers, who they are thankful for.

“We owe the world to them,” Jeanette said. “We’re thankful for them giving us the daughter we have.”

Jeanette said Faith is lucky to have had her birth and foster mothers. She said the family plans to go back to China someday. Jeanette’s first priority is her kids, Aaron said.

“She’ll drop anything for them,” Aaron said. “The best compliment we get is when people say how well behaved our kids are — that’s a testament to Jeanette and how much time she spends with them.”

Owning her own business has helped Jeanette keep flexible hours. She’s owned TouchWorks Massage in Albert Lea since 2002. She went to college for business, and always knew she’d want to be a business owner.

After a car accident in 1995, massage helped her heal and she decided to do it for her career. She works with independent massage therapists and a chiropractor. She doesn’t think of herself as their boss.

“We all make decisions together,” Jeanette said.

She knows she’s lucky because she looks forward to work in the morning and looks forward to going home after work. Jeanette said she and Aaron are hands-on parents. As a family they like to go on bike rides, play games, play hide and seek, paint and color, among other activities. Though it can be difficult to schedule the kids’ activities and her and Aaron’s work schedules, Jeanette loves being a mother.

“I like to watch them succeed and grow,” Jeanette said. “I like the craziness and innocence and being a kid with them.”