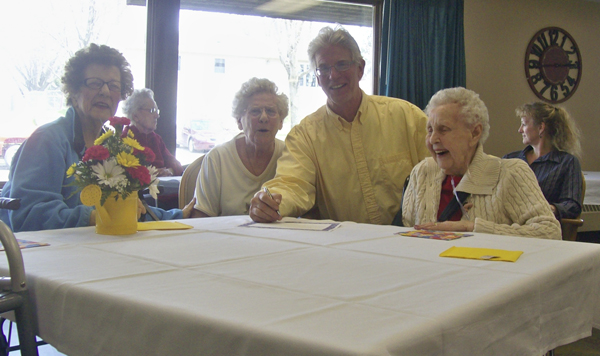 Larry Baker poses for a photo with some women at Thorne Crest Retirement Community after he signed an Older Americans Month proclamation for the city of Albert Lea. -- Submitted photo

Each year in May since 1963, people across the country have come together to celebrate the enormous contributions of older Americans. This year, President Barack Obama signed the proclamation declaring May as Older Americans Month.

This is the 48th year that has been recognized and a proclamation has been signed by the president. President John F. Kennedy signed the first proclamation, which was then called Senior Citizens Month. Now, thanks to President Jimmy Carter’s 1980 designation, the month is now known as Older Americans Month, which has become a tradition.

Within Older Americans Month comes a special week. National Nursing Home week begins each year on Mother’s Day. This special week honors all residents of nursing homes, assisted living and senior housing. It also presents a special time to honor caregivers, those who spend their life’s work assuring that older adults can age with dignity in the place they call home.

The theme of this year’s celebration is “Older Americans: Connecting the Community.” The theme pays tribute to the many ways in which older adults bring inspiration to our communities. Their shared histories, experiences and wealth of knowledge have made our culture, economy and local character what they are today. The theme also highlights the many ways technology is helping older Americans live longer, healthier and more engaged lives.

Older Americans Month is celebrated across the country through ceremonies, events, fairs and other such activities. On Thursday Albert Lea City Council 2nd Ward Councilor Larry Baker signed an Older Americans Month proclamation for the city of Albert Lea. This was attended by representatives and older Americans from St. John’s Lutheran Home, Good Samaritan Society and Thorne Crest Retirement Community.

All senior living communities in the area have special events planned. Stop by, say hello and enjoy a cup of coffee. Or join us here at Thorne Crest for our Senior Day Western Breakfast from 7 to 9 a.m. on May 13. Or join our community-wide seventh annual classic car show on May 19. Take time this month to enjoy the company of older Americans. All of us at Thorne Crest would like to recognize our special older Americans, all of our caregivers and our caring staff for their continued contributions to our community.