The funeral service for Palmer H. Hanson, of rural Oakland, will be 11 a.m. Thursday at Oakland Lutheran Church, rural Oakland. The Rev. Robert Berthold will officiate. Interment will be in Hayward Cemetery. Visitation will be from 5 to 7 p.m. Wednesday at Bonnerup Funeral Service, Albert Lea and one hour before the service at the church. 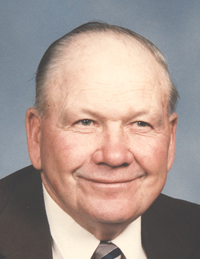 He was born and raised north of Hayward and attended Hayward Country School. Palmer took care of the family farm while his brother was in the military service. He married Bernice Hoyne at First Lutheran Church in Albert Lea. They rented a farm just north of the family farm. In 1958 he purchased the family farm on County Road 46 just south west of Oakland. Palmer was a dairy farmer. He belonged to the Freeborn Mower Electric Board (REA) for 20 years and also belonged to the Clarks Grove Creamery Board. Palmer enjoyed raising and showing cattle at various competitions. He also loved horses. He enjoyed harness racing and worked at Canterbury Park, Shakopee, when it first opened. Palmer is especially known for helping others,