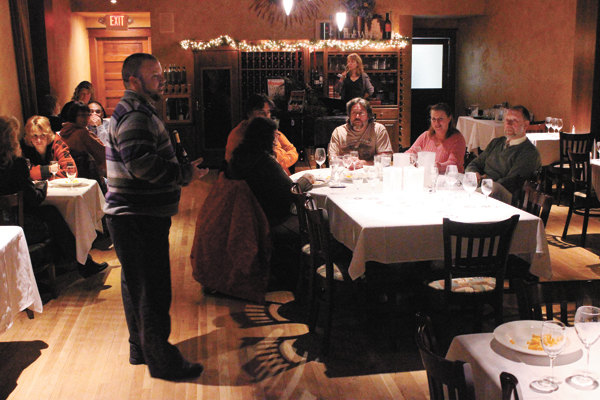 To say that the monthly Fountain Warehouse Liquor Wine Tasting event at Crescendo in Albert Lea is a slice of the big city in the small town would be cliché.

It’s so much more than that. 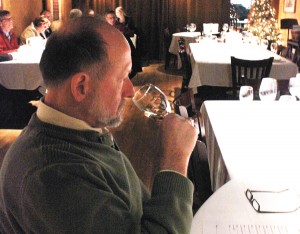 On the second — or third — Tuesday of each month, friends, couples and mere acquaintances gather at this fine dining restaurant, where they enjoy hors d’oeuvres, lively conversation, more than a few laughs and several types of wines.

“We have a really loyal group,” said Ron Freeman, owner of Fountain Warehouse Liquor in Albert Lea, who has been hosting the event at Crescendo since it opened more than a decade ago.

Each month, Freeman brings in a wine vendor who showcases seven or eight different wines. For just $5, each participant gets to “sample” each wine. Although the wine tasting begins at 7 p.m. and lasts until 9, people start filing in the doors about a half hour before the first bottle is uncorked.

They take seats inside this metropolitan-type setting, complete with blond hardwood floors, high blue painted tin ceilings, cozy “mood” lighting, Troy Doyle artwork on the walls and a baby grand piano, which if you’re lucky, might be played by Crescendo owner Robert Tewes before the night is through. White linens, low lights and a menu of gourmet appetizers, which range from crab cakes with roasted garlic and lemon aioli to sweet potato raviolis, set the scene for an uptown evening experience.

Some people, Freeman said, have been coming to these tastings since day one. For others, it’s their first time. But it doesn’t matter, because everyone was welcome to this cozy dining area on this blustery winter’s night.

Gayle Neist, who has been attending the event monthly for the past eight years, is one of the first through the door. With her are “newbies” Sharlet and Scott Boelter. 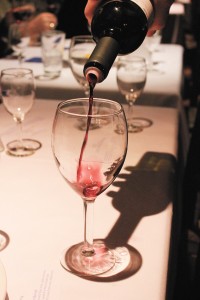 The first splash of cabernet hits the bottom of a glass during the monthly wine tasting at Crescendo in downtown Albert Lea. -- Tim Engstrom/Albert Lea Tribune

Neist loves wine. It’s a taste that’s grown and matured for her over the years. In fact, wines have become a hobby of sorts for Neist. When she started attending the wine tastings, she was a big fan of white zinfandel. Now, she prefers a “big, juicy, red cabernet.” She said the tastings have really opened her eyes, and expanded her taste buds, to all different types of the divine drink.

Although the Boelters have only attended this event once before, they really enjoy learning about the wines along with the tasting.

“We just started experimenting with wine over the past year,” Sharlet said. “But where else would I learn about it, the history of the different varieties, if I didn’t come here?”

Of course, its people like Justin Esplan, not just a wine vendor for Paustis & Sons, but also a passionate advocate and educator of wine, who keeps the crowd enthralled.

“I have a passion for wine,” he said.

On the cold winter’s night, Esplan started the tasting off by pouring glasses of Wente riesling, one of the top selling holiday wines. A white wine with a hint of green apple and apricot, a “safe” choice for the holidays. A crowd pleaser for those who have a taste for the lighter varieties, Esplan then moved down a list.

As he poured the Casillero del Diablo malbec, a medium-body red with vanilla tones, he told about the origin of the wines, the vineyards where the grapes were grown, the climate the grapes best mature in, and the history of that particular type — or brand — of wine. This is just another added touch he likes to give to the participants.

After Esplan explains the history, flavor, climate, unique label, favorable food pairings, or whatever interesting facts he can share about the wine, he and Freeman circle the room, making sure everyone has a sample the size of what’s generally considered a full portion on a restaurant menu in their glass.

Wine bottles sit in the order they will be sampled, usually starting with sweet white wines and ending with tannin-heavy reds.

Participants take notes on a wine listing, and friends compare notes while passing around plates of Colby jack and cheddar cubes to cleanse their pallets between each of the different wines served up. Connoisseurs teach “newbies” about swirling, which keeps the flavor alive in the glass, and looking for “legs,” which is an informal method of measuring alcohol content.

“You tend to become a wine snob,” laughed Ken Delano, who has been attending these events for 11 years now.

He has switched from a lover of white wines to red over the years. He also enjoys being able to taste the wines before purchasing them, as bottles of wine can get quite expensive.

Red did seem to be the color of the evening, as the Earthquake Cabernet, which was the next to the last drink on the tasters’ menu, was introduced.

The robust — if not rudely brash — red wine had a big, bold flavor, which earned it a hearty round of applause.

And for those who didn’t care much for the Earthquake Cab, the final wine on the list was sure to please. This light, bubbly, Rosa Regale offered a festive blend of sweet passion fruit blends that popped on the pallet.

“There really is something for everyone, from sweet to dry whites to reds and ports,” Neist said.

Esplan also wished to offer up his No. 1 piece of advice for those who are just getting into wine.

“The No. 1 thing is for people not to be intimidated by wine,” he said. “There’s a wine for everybody. Don’t judge all wines by trying just one.”

As seen in the Spring 2011 issue of Southern Minnesota Magazine.