Philip Richard Thompson, 90, of Owatonna died on May 25, 2011, at Cedarview Care Center. Mass of Christian burial will be at 10 a.m. on Saturday at St. Joseph Catholic Church, Owatonna. Visitation will be at the Brick-Meger Funeral Home (1603 Austin Rd, Owatonna) from 4 to 7 p.m. on Friday with a prayer service at 7 p.m. An hour of visitation will precede the funeral liturgy on Saturday at the church. Interment, with military honors provided by the Steele Co. Funeral Detail, will be in Sacred Heart Cemetery, Owatonna. Phil was born to Clarence and Ella (Carlson) Thompson in Albert Lea on Nov. 24, 1920. Following his graduation from Albert Lea High School in 1938, Phil attended Albert Lea Junior College. He transferred to the University of Minnesota, joined R.O.T.C., and earned his business administration degree in 1942. 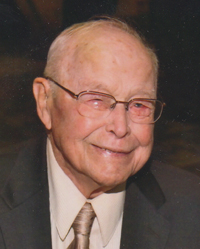 Upon graduating from college he completed naval officer training school and served honorably in the U.S. Navy during World War II. Phil began his career with Federated Insurance in 1947 where he worked in the actuary services department until his retirement in 1986. He married Joan Romer on May 21, 1949, at St. Hyacinth Catholic Church, Owatonna. Phil was a member of St. Joseph Catholic Church, the Elks club and the American Legion. He enjoyed golf, tennis, playing cards, reading and refinishing furniture. However, Phil’s greatest joy in life was his family.

He was preceded in death by his parents and his sister, Fern Moss. Memorials are preferred to St. Joseph Church or the Owatonna Area Hospice Patient Fund. Funeral arrangements completed with the Brick-Meger Funeral Home and condolences may be expressed at www.brick-megerfuneralhome.com.