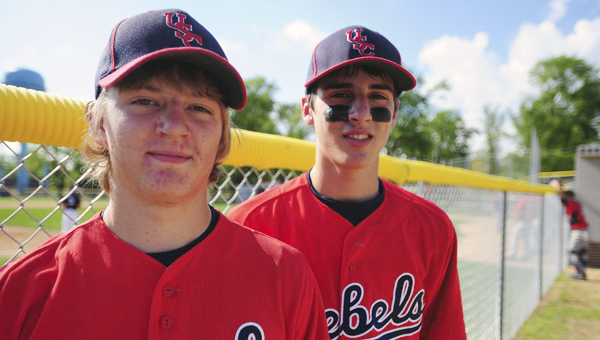 The two cousins grew up playing baseball together — teaching each other fastballs, curves and knuckles in a hay field in front of David’s home in rural Wells.

Now high-schoolers, Anthony, 18, and David, 16, are still close and stand 64 feet away from each other nearly every game for the United South Central Rebels baseball team.

Anthony and David are the Rebels No. 1 and 2 starter pitchers, respectively, and when one cousin’s pitching the other’s playing third base. Anthony and David have each other’s backs defensively, and neither is shy to walk to the mound to help the other out.

Before this season, neither pitcher had started on the mound on varsity, and both admit they’re having better seasons than anticipated.

Anthony has become a strikeout machine, averaging around 10 per game after developing his curveball throughout the season.

“I wasn’t expecting to be the ace,” Anthony said. “I’ve started throwing my curveball more and they can’t hit it. With how many strikeouts I’m averaging, coach (Pat) Frank has kept me in.”

David has been solid, too. He strikes out fewer batters than his older cousin but doesn’t walk very many batters, either. Both pitchers have kept a team that doesn’t record many hits near the top of the Gopher Conference. On Thursday the Rebels play New Richland-Hartland-Ellendale-Geneva in the second round of the Section 2A tournament.

Expectations were lower this season for the Rebels after last year’s team finished a half game out of first in the conference and graduated star pitcher and Tribune Co-Player of the Year Nick Fure. Anthony didn’t expect to replace Fure as the team’s ace, but he has.

“I didn’t expect to fill his shoes like I have,” Anthony said. “But he helped me improve my pitching.”

Anthony said that Fure comes to some games and critiques his pitching. He also said he learned his curveball from Fure.

But Fure isn’t the only pitcher Anthony has learned from. Anthony and David continue to teach each other in the hay field and in the ballpark, too.

“He tells me if I’m not holding my leg up long enough or if I’m coming out of my windup,” Anthony said. “He has a better knuckleball than me and tells me what I’m doing wrong.”

David said he often reminds Anthony to throw strikes when he visits the mound, and that he’ll pick him up in the field.

At the beginning of another postseason run, Anthony and David are happy how the Rebels have progressed this season. After losing three of their first four Gopher Conference games, the Rebels have won six straight. Anthony credits the late success to the team’s defense.

“We’ve been really solid behind the pitcher,” Anthony said. “We’re not giving up as many errors.”

David said the team’s goal is to make it to the state tournament. The Rebels will need to keep finding ways to manufacture runs in order to get there. Through 15 games this season, the Rebels have averaged fewer runs than hits.

“It doesn’t matter how you get the runs as long as you get the win,” David said. “We’ve got to keep winning.”