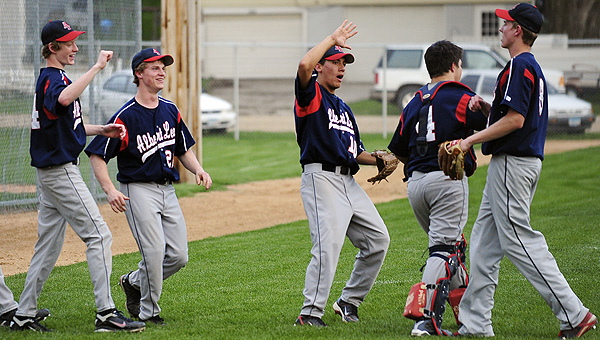 Two of the top three baseball teams in the Big Nine Conference showcased their strengths Tuesday as Albert Lea and Owatonna split a low-scoring doubleheader at Hayek Field.

The Tigers won Game 1 3-1, and Owatonna won Game 2 2-0. Strong pitching and defense dominated both games as neither team recorded more than nine hits over the series.

After being held without a baserunner through the first two innings of Game 1, the Tigers’ Josh Eisenbraun reached first to open the bottom of the third on a throwing error by Huskies second baseman Brent Meger. After J.T. Bellrichard popped out in foul territory on a bunt attempt, Makael Lunning tried to bunt Eisenbraun to second. With two strikes, Lunning got the go-ahead to swing and hit a single to right field that moved Eisenbraun to third base. Ethan Abben walked to load the bases and Cory Hansen hit a sacrifice fly to center field to score Eisenbraun and give the Tigers a 1-0 lead. Well off the base when Hansen’s ball was caught, Lunning retreated to second to attempt to tag to third but was thrown out for the third out.

The Huskies wasted little time in tying the game as Matt Simon hit the first pitch of the fourth inning over the left-field fence to pull even.

The bottom of the sixth looked like more of the same when Lunning and Abben both flew out to right field but the Tigers found other ways to get on the base paths. Hansen took first when he was hit by a pitch in his left leg, and Kortan walked to move Hansen into scoring position. Then Klatt and Sorenson did what they’ve done so often this season and drove in back-t0-back runs. Klatt hit a single to left field to score Hansen, and Sorenson doubled to right field to score Kortan. The game-winning hits gave the Tigers a 3-1 lead, and Klatt finished the game by throwing a hitless top of the seventh inning.

The Tigers’ defense committed no errors in Game 1 and staved off Huskies runs with two outstanding plays.

In the third with the Huskies’ Trevor Thomas on second base with one out, Meger hit a single in front of right fielder Hansen. With Thomas rounding third, Hansen threw on a line to catcher Kortan who tagged Thomas out in front of the plate. With the game tied 1-1 in the sixth, the Huskies loaded the bases with one out. Nathan Hager hit a grounder to Klatt who threw to Kortan for the force out at home, and Kortan threw to first baseman Eisenbraun to complete the double play.

Kortan also threw out two Huskies (9-4, 7-4)basestealers in two attempts and picked off a runner.

“Kortan excelled as a catcher tonight,” Tigers coach Joe Sczublewski said. “It was the best he’s ever played behind the plate.”

Klatt struck out eight and walked four over seven innings.

The Tigers and Huskies each recorded three hits in Game 2, and the Huskies scored a run in the first and second innings.

After giving up three hits in the first two innings, pitcher Sorenson threw five consecutive no-hit innings but the Tigers’ rally attempts fell short. The Tigers loaded the bases in the sixth inning with two outs but a hard-hit grounder to shortstop by Sorenson was knocked down and the Huskies got the force out at second base. The Tigers also had runners on first and second base in the seventh but couldn’t score a run.

“It was a disappointing loss because after the first game we thought we could get the win,” Sczublewski said, of Game 2. “But a split with Owatonna isn’t all that bad.”