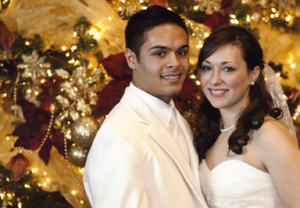 Parents of the bride are Edwin and Gwen Plantage of Albert Lea.

Parents of the groom are Wade and Vonda Oliver and Alonzo Roddy, of Coon Rapids.

Maid of honor was Darcy Plantage, of Texas. Bridesmaids were Cassie Plantage, of New Brighton, Kayla Krech, of Eagen, Danielle Sustad, of Little Canada, Kelli Anderson, of Minneapolis, and Ajaa Oliver, of Arden.

Ushers were Andrew Penning, of Wells, and Levi Deiss, of Coon Rapids.

Ring bearer was Daniel Reese, of Owatonna, son of Dan and Sandy Reese, and Joe Stepp, of Coon Rapids, son of Jackie Stepp.

A reception followed the ceremony at America’s Best Value Inn.

Ahna is a senior at Northwestern College and currently works at the mail center on campus and Gap at Rosedale Mall.

Rico is currently attending Northwestern and is in the Air Force Reserves. He also works at the college store. He is deployed to the Middle East until July 2011.

After Rico returns from deployment the couple will honeymoon in Cancun, Mexico.

The couple resides in Little Canada.