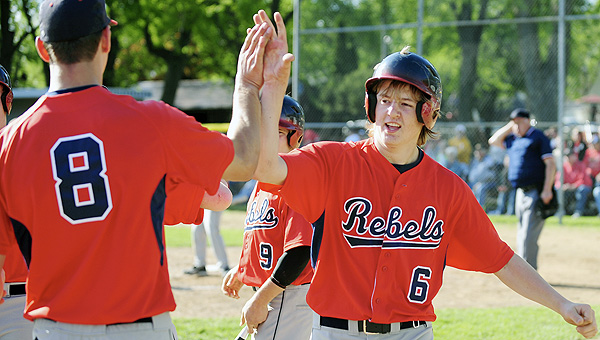 United South Central sophomore David Stenzel (6) slaps hands Thursday with Jason Huper (8) on his way back to the dugout after scoring in the bottom of the second inning against New Richland-Hartland-Ellendale-Geneva. -- Andrew Dyrdal

WELLS — Jason Huper hit a game-winning double with two outs in the bottom of the seventh inning to lift the United South Central Rebels baseball team to a 4-3 walk-off win over the New Richland-Hartland-Ellendale-Geneva Panthers at Thompson Park in Wells.

The No. 2 Rebels (13-6) beat the No. 7 Panthers (6-13) twice during the regular season but faced starting pitcher Sam Lundberg for the first time Thursday. The third win meant more, though, as the Rebels advanced to the Section 2A South semifinals.

“(NRHEG) is not a No. 7 seed,” Rebels coach Pat Frank said. “They’re a good ballclub. We knew it was going to be tough, and before the game I told the kids to put the ball in play and we ended up getting a win.”

Tied 3-3, Dustin Dylla grounded out to second base to lead off the bottom of the seventh inning. Tyson Morton singled and Anthony Stenzel flew out to left field for the second out.

Hitless in two at bats, Huper drove a double into the outfield, scoring Morton easily from first base without a play at home.

The Panthers opened a 1-0 lead in the first inning when David Lassahn scored off a Rebels’ error.

The Rebels responded in the second when David Stenzel drove in Cole Stenzel with an infield single to third base. Then with two outs, Trey Allis hit a two-run triple to deep left field to pull the Rebels ahead 3-1.

The Panthers tied the game in the third when Lassahn and Lucas Meyer scored off a bases-loaded single with one out. The Rebels then picked off Lundberg at home and a runner at second base to end the inning.

The Rebels play again at 5 p.m. Tuesday against No. 3 Mankato Loyola (11-7) at Thompson Park in Wells.