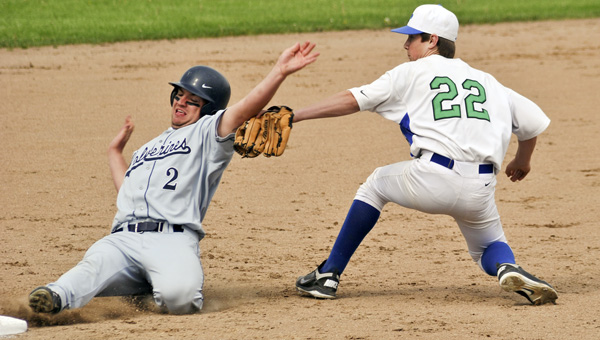 AUSTIN — The Glenville-Emmons Wolverines baseball team locked up a Southeast Conference championship Tuesday with an 8-3 win over the Lyle/Pacelli Athletics in Austin.

The Wolverines finished with a 9-1 Southeast record and won their final six conference games to pull away from Mabel-Canton atop the league.

Peter Hansen led off the first inning with a single and stole second base. Levi Garner hit a sacrifice bunt to move Hansen to third, and Spencer Kral scored Hansen on a single.

Tyler Woodside then singled, and Trent Thoms singled to score Kral and give the Wolverines a 2-0 lead.

Zack Williamson hit a two-run triple and scored on a throwing error to third base.

Williamson walked in his next at-bat in the third and again scored on throwing errors. As Williamson attempted to steal second base, Athletics catcher Collin Roberts threw the baseball past the second baseman and into center field. Williamson moved to third on the error and scored when the Athletics’ center fielder overthrew third baseman Jordan Hart.

The Wolverines added two more runs in the fifth when Thoms singled to score Tyler Woodside, and Landon Hall scored from third on a wild pitch.

The Athletics scattered three hits against starting pitcher Woodside, who struck out four, walked four and allowed no earned runs.

“They had a nice pitcher on the mound today and he threw a lot of strikes,” Athletics coach Dan Zielke said. “We just couldn’t get the ball out of the infield really. But it was good to see we put the ball in play a lot.”

Kral finished with three hits for the Wolverines, and Thoms and Williamson led the teams with two RBIs.

The Wolverines play again Tuesday in the first round of Section 1A East tournament.