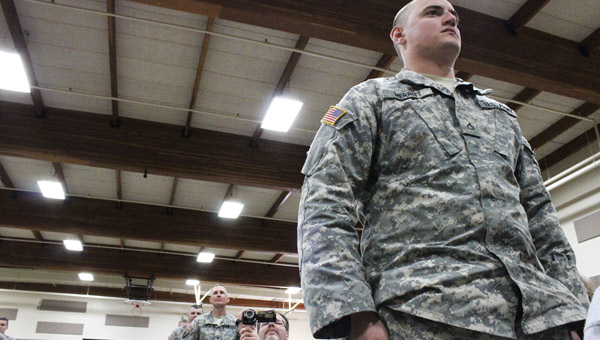 Pfc. Joshua Merrit of Austin stands at attention Tuesday while Delta Company 1st Sgt. Matthew Price called off the roll of soldiers who would be deploying to Kuwait. -- Tim Engstrom/Albert Lea Tribune

Family members of deploying soldiers said that though deployments are difficult, they’re proud of the men and women who serve.

Northenscold is the wife of Derek, a specialist in the Delta Company, 2nd Battalion, 135th Infantry Regiment, 34th Infantry Division.

“I have faith in him,” Northenscold said. “I’m happy to be strong for him.”

Nearly 600 people attended a deployment ceremony at the Albert Lea Armory Tuesday morning. Sgt. Jesse Miller had a big group of family members at the ceremony to see him off.

This is Jesse’s third deployment, and his dad, Steve Miller, said that though he knows his son loves what he does he hopes it’s his last deployment. Jackie said she was looking forward to being able to video chat with Jesse during his deployment, which they hadn’t been able to do when he was deployed before.

This is the second-largest deployment of the Minnesota National Guard since World War II, with a total of 477 soldiers leaving. The soldiers will help with Operation New Dawn, and will be stationed in Kuwait. They will provide security at the base and security for troops, equipment and supplies through Iraq.

Rep. Rich Murray spoke to the crowd and said he’s enjoyed meeting members of the unit.

“I salute you for your service to this country,” Murray said.

He said he hoped family members lean on people in the community for help and support when needed.

“Every day in Minnesota is veterans day,” Murray said.

Capt. Steven Wayne also spoke Tuesday. He said he was overwhelmed by the Beyond the Yellow Ribbon support group and thanked them for supporting the troops.

Family members of Daniel Springborg, a soldier who deployed Tuesday, said they thought the ceremony showed how much the community supports the soldiers.

“I thought it was really significant and well done,” Daniel’s wife, Gail, said.

Gail said that she’s proud of her husband for his commitment to the country, but that the separation will be hard. Daniel’s parents Roy and Barb were at the ceremony, and Roy said they’ve had to deal with deployments before.

Wayne said during his speech he understands that soldiers feel like they should just go without the ceremony and the fanfare. Though some family members think they might enjoy the ceremony more than the soldiers, they still think it’s important to show the soldiers they’re supporting them.

“I think it’s nice for them to feel support before they go,” Northenscold said.

Click here to see a gallery of images from the ceremony.